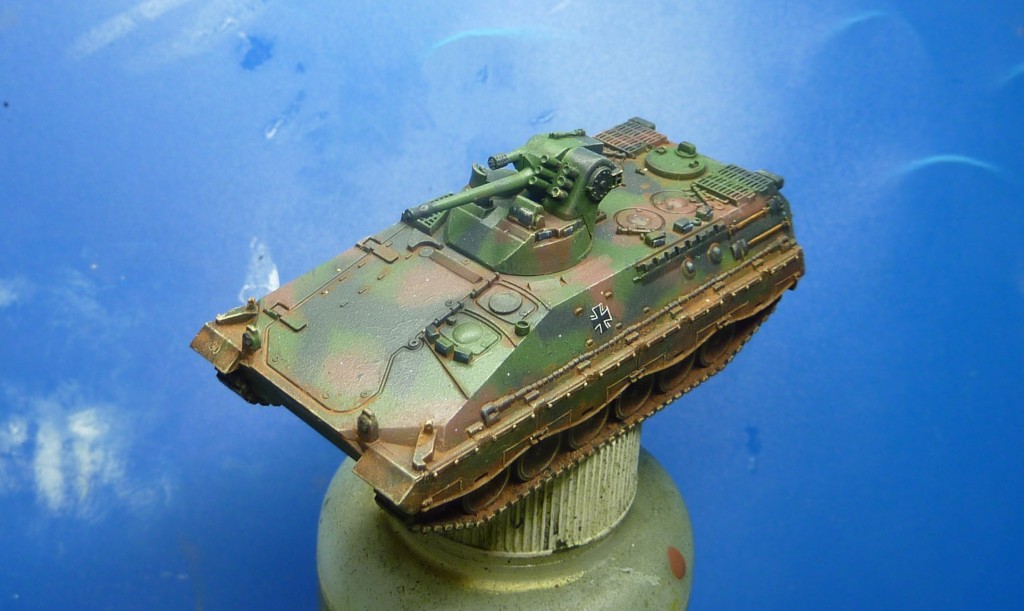 This week, Lee reviews the Battlefront Marder Infantry Fighting Vehicle, one of the plastic releases for “Leopards”.

And so we reach the last of the Leopards plastics, the Marder IFV.  This fills the APC slot similar to the BMP and M113 in the Soviet and US forces respectively; both fine kits that set a high bar for the Marder.  Let’s see if it can make the jump and stick the landing!

The Marder was one of the first of a new breed of armoured personal carrier – the Infantry Fighting Vehicle, being pipped to the post by the BMP-1 for dibbs on “first” (although purists may argue that the German Schützenpanzer Lang HS.30 gets that accolade).

Post WWII, the halftracks and armoured trucks that characterised WWII were replaced by fully tracked armoured personnel carriers such as the FV432 or M113.  These had enough armour to protect the infantry from rear area shelling and enough mobility to keep up with the tanks,  but were intended to drop the infantry off ahead of making contact, before withdrawing.  As such, they had only a light armament for AA self-defence, typically a 7.62mm MG (or a far more effective 0.50 M2 for the US).

As the NBC threat increased, the concern became that the Infantryman would not be able to operate in a contaminated battlefield and would need his “battle taxi” to be a more door to door service.   The Infantry Fighting Vehicle refined the above to add a greater offensive capability (typically a small calibre autocannon with coaxial MG) and the ability for the troops to fire their weapons from within the compartment.  The addition of a turret and its crew inevitably cut the troop carriage space, so platoons got smaller (ignoring crews).

The Marder was the German response to this requirement.  The Marder was armed with a high elevation 20mm for anti-helicopter defence (shades of the SdKFZ 251/17) and initially had a remote fired MG turret on the rear of the hull to suppress any infantry that may try to fire on the disembarking troops.  This was later dropped as it never worked as well as intended.  The troops were provided with firing ports for their G3 assault rifles so they could fight undercover.  The actual worth of these ports was questionable and all IFV that were so equipped (Bradley, Marder, BMP) quietly dropped them in later variants.

All in all, the Marder was a good example of the IFV concept, for better and worse, which suffered from a high unit cost, heavy maintenance requirements and a small calibre main armament compared to its peers.

The kit comes with 5  sprues, each holding one Marder, plus a resin sprue of tank commanders and a sheet of decals; both the same as the one in Leopards so there may be some repeat of registration numbers!

The Marder kit has no real options or stowage on it.  The former was probably to be expected as the design was pretty static in the Team Yankee period, but the latter was surprising as some photos from contemporary exercises shows tarp rolls and bed rolls externally carried occasionally.  That said, the sprue does have a Milan on its cupola firing post to cover that option from the rules.  There’s no real way to make them removable so it’s going to be the case of deciding if you want it on or not during assembly.  Sadly there is no option on the commander sprue for actually manning the Milan.

The assembly of the kit is fairly straight forward. The hull is made up of top, bottom and rear plates which all fit together as snugly as the M113 and BMP examples.  Bazooka skirts then get fitted to the side and this can be done with tracks off, handy for painting he tracks separately.  Sadly, there are no “open hatch” options for any of the hull hatches, including the main ramp.

The turret has a base plate, upper turret, then four parts for the gun, smoke grenades and the gun mount.  The gun mount fixes the gun at one orientation so I can’t, easily, be modelled elevated for anti-helicopter work.  The cannon is also somewhat chunky but a necessary evil for wargaming purposes.  The commander hatch can be glued open or shut but is quite unsupported in the open position.  Bloody thing has already broken off in the model case in pre-game transit!

All in all, assembly was quick and painless, even without instructions.  The only obvious mould/join line is the two halves of the main gun which can stand out if not dressed prior to painting, otherwise it’s a very clear, crisp construction – consistent with the other Team Yankee APC/IFV offerings.  The level of detail on the hull is really good with some nice panel depth the hatches and engine covers.  The tools are a little spindly and the tow cable looks unnatural but that is often the case with plastic kits of this scale. Unpainted and sans tracks – most sprue attachment points are hidden once assembled.  Only the side-plates and cannon really need cleaning. Panel depth on the hatches is excellent; really easy to get good results with the wash.  Just wish it was possible to open them! As with other plastics, the driving lights suffer a little from the limitations of plastic.  Vision blocks could also do with a tad more detail but suffice. Not being able to have an open rear hatch for using the model for objectives is a blow.  But detail does not suffer from being on the back.  Even the driving lights are present. Tow-rope is a little odd in appearance, but a welcome addition none-the-less The Marder’s 20mm has the anti-aircraft attribute which provides a handy, if limited, anti-air asset .  Whilst it’s not going to pop a T-72, even from the flank, it does provide a handy anti-BMP-2/Mil-24 asset although the small platoons and low firepower prevent it from really impressing.  The co-axial MG really brings little to the party.  The ability to mount the platoon Milan gives the tank a bigger punch but its hard to see when I’d choose to do it over just having I dismounted.

The Marder has armour comparable to the M113 and BMP, and sufficient manoeuvrability that it can keep up with the armour over most terrain whilst protecting its Infantry cargo.  Once dismounted it can provide a handy light tank unit but its lack of punch may be better served providing overwatch to its Infantry.

The plastic Marder kit is a fine model that is easily built and detailed enough to reward the painter.  Whilst it would have been nice to have some more options (open secondary hatches, main troop hatch, etc) what it does present is well produced.