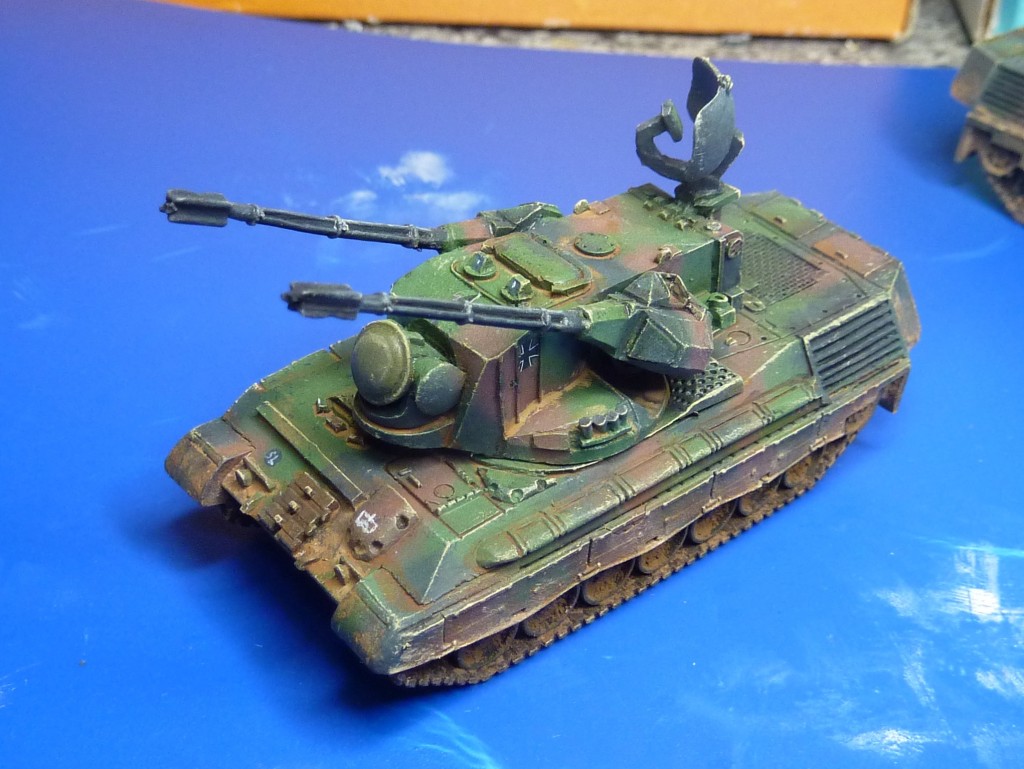 Whilst the West Germans enjoy the best tank in the game to date; even the Leopard 2 has to worry about the Russian air threat.  Cobham armour gives scant protection against the AT-23 hit of the Spiral anti-tank missile, let alone the AT27 of the SU-25’s KH-25 .  7.62mm AA MG is *not* going to cut the mustard here.

Thankfully, the West Germans enjoy the best anti-air protection in the game too.  One component of that is the Gepard self-propelled AA Gun. It’s come a long way from a Flakpanzer…

The Gepard entered service in the early seventies as a response to the Russian Shilka system.  Much like the Russian counterpart, it combined a rapid firing autocannon (a pair of 35mm autocannon compared to the Shilkas four 23mm) with an automated radar based tracking system able to engage low flying fast jets and helicopters.  The Gepard then mounted this on a Leopard 1 chassis, allowing it to keep up with the MBT.

The combined impact of all that is a vehicle that will shred a Hind, if it gets an opportunity.

What’s the German for bbbrrrrttttt?

The Gepard model is of resin and metal construction with the surprising feature that the tracks were resin components much like the hull and turret.  Not seen that before!  The guns and search radar are metal and were fairly clean in terms of flash and the resin was of clean construction (no bubbles, dimples). The turret has the base of the autocannons pre-fitted which sets the gun at about a 30 degree angle upwards.  They can’t be moved.  It saves on the bit count and getting the guns aligned with each other but limits modelling options somewhat.  The turret hatch is also fixed so there is no option of an unbuttoned commander but this is an unlikely occurrence in real life, so no great loss.

The Gepard, like other non-plastic Team Yankee models, is clearly hand sculpted.  When I got into the hobby, that was pretty universal but we are starting to see a lot of company move to CAD sculpted resin models which have crisper lines and finder detail and its fair to say that expectations of what to accept in detail are starting to shift.  Thankfully the Gepard, for the most part, is a good example of the hand sculpting craft but a few features, such as the hull intake slats, the perforated turret deck and driver cover, and a conduit on the front glacis plate do look a little uneven.  Other than that, vision slots, hatches, side skirts, tracks and the tracking radar have good definition and really come out nicely with some paint on.  The tracks also benefit from being resin, with better definition of track links and road wheels than we often see with the white metal equivalents.  Not opposed to seeing more models like that! Literally the work of minutes to assemble

In assembly, the tracks attach to the hull very crisply – no warped metal tracks here (shame the M109 doesn’t share that but that is a story for another review).  The search radar’s feed horn (the bit in front of the dish) was a little fiddle but not excessively so.  The gun barrels drop into the receiving holes but there is not much overlap and I found I had to keep them restrained until the glue cured so as to stop them drooping.  They are also easily dislodged if hit, I managed to snap one of them out, taking a chunk of resin, whilst painting when I knocked it with the airbrush.  On the other hand both Gepards have survived two trips in the figure case so maybe I’m just clumsy!

I didn’t have access to an alternative manufacturer’s Gepard so no side by side comparison.  There is at least one ‘all metal’ one on the market, but the photo doesn’t give many clues as to quality and price is no better than BF, especially when most shops offer a 10% discount on the BF example. The Gepard has an almost insectoid look to it.  Or a very happy 1950’s sci-fi robot that wants to hug. The search radar can be fitted in any direction.  It spun around so feel free to fix it how you wish. The rear detail is good.  Road lamps and reflectors are present although the colour disappeared under the dust pigment…  No registration number board though. No we don’t have the backs…

The Gepard has good mobility, with a “cross” equal to the Leopard 2 but slightly slower in terrain dash than the Leopard 2 it is escorting.

The Gepard’s main armament packs a punch – five AT 11 FP4 hits being put out when static, and I can see a platoon of six Gepards being devastating to a BMP-2 company from ambush.  But the Gepard is not a tank; Its armour of 3 is no defence to the BMP-2’s autocannon in return fire.  It does have top armour 1 to help stave off artillery which is nice!

I used my pair of Gepards at the weekend and they did okay at keeping the Hinds back.  The range of 32” forced the Hinds to act accordingly and its my inability to roll hits or firepower that really limited their kills.  I even bagged a T-72 with a side armour shot to win a game! However, as I anticipated, BMP-2 were easily able to cut the Gepards down.  Some caution needs to be expressed in their use.

I do have a technical grumble that an all weather radar based tracking system is apparently degraded by night… and that the optical back-up sights don’t even appear to have an IR capability that I can find reference to.  But it’s a small grumble and maybe BF reflecting ECM degradation or something.

It’s hard not to recommend a unit of Gepards for a German force.  Yes, the Roland is the better AA weapon, but the Gepard has better versatility which, when points are in so short a supply in the army, counts for a lot.

Whilst not quite as sharp as the plastic releases for Leopards, the Gepard is still an excellent resin kit. Always nice in a unit that is going to be essential for the tabletop game!  I have no reservations recommending this to any West German player.