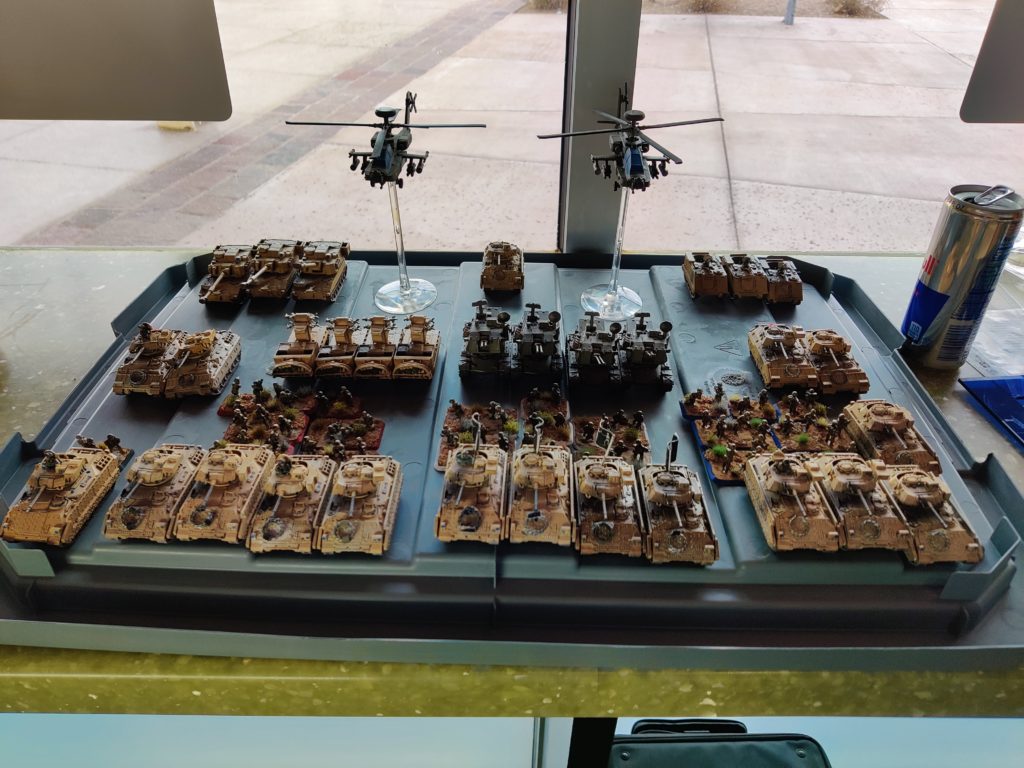 Today Alex brings us news from a local 105pt Team Yankee tornie on his side of the pond.

Once again I hope this finds you all safe and doing well wherever you are. Unfortunately, with the advent of the global COVID pandemic, our collective gaming has taken an unprecedented hit when it comes to actually getting games in and playing in tournaments. This past weekend itself was supposed to be the 2021 Las Vegas Open but, unfortunately, the event was cancelled. However, my club mates and I put together our own little “open” to play, roll some dice and enjoy each other’s company. So here is the battle report for your viewing pleasure!

Before going into the battles, I cannot express enough thanks to my good friend and team mate Eric who allowed us to the use the space of his restaurant to play our little tournament. He also was able to provide food and drink for us for a small “donation”. This is what friendship is all about.

That being said, this past weekend my team, the Desert Nomads converged in Albuquerque, New Mexico to play. Our team is spread out between the states of Texas, New Mexico, and Arizona, and can be found on facebook if any readers are looking for a group to play with. In total there were 8 of us, including one master (My good friend and 2020 West Coast Nationals champ Vincent Arroyo) to throw down. Fun was to be had by all.

Did I ever mention I love Bradleys?

Well, as a former Master Gunner and Bradley crewman I do.
So, naturally, I built a force around the idea of a full mechanized company of Bradleys. Where I made a particularly large departure was the fact my force included ZERO tanks.
I did this mainly for aesthetics, as a pure Bradley infantry company was appealing to me, and the fact that M1A1s are SUPER expensive.
So, my formation was based around a full company with HQ, and three Mechanized Platoons, all in M2A2 Bradleys. I bulked up my formation by adding M106 mortars and two M3 Bradley Scout Sections. This brought my total Brad count to 17, and with their TOW-2s I felt I could handle most armored threats.

In support I had Paladins with all the fixings (I wanted to see what Copperhead would do alongside FASCAM and minelets), my venerable SGT Yorks and also some new Chapparals on air defense, all rounded out by a pair of AH64 Apaches for high-threat sniping.

I felt this force was well balanced, yet also a challenge as I had no real armor support to rely on.

My first matchup was against my friend Hayden, and his heretical combination of Iraqi and Israeli mechanized companies!

I opted to ‘defend’ to his ‘attack’, and we rolled up Bridgehead. WHAM! Get hit with the ‘deep reserves’ stick right out of the gate! That will teach me to ignore my  own advice (see my Queen Of Battle article).
I put two platoons of Bradleys in reserve, along with the Apaches. Hayden concentrated his deployment on my left flank, placing two medium sized platoons of Iraqi mech in AMX-10s and BTRs while holding his Israelis back.

Hayden started off by pushing the action on my left flank and in the center, rolling up a unit of Magachs to support his infantry while trying to snipe my well positioned scouts with his Perehs. Taking out one scout, Hayden opted to pass turn.
On my go, I rolled one unit of reserves exactly where I needed them (on my left) and popped my ambush. This put 9 Bradleys up against 23 BTRs and AMX’s. Outnumbered? No problem! I immediately engaged with what I consider the Brad’s real money maker: its 25mm cannon. To put that in perspective, its ROF 3 no matter what, so that is 27 shots off 9 tracks hitting on 3s. Needless to say, my dice rolled hot, destroying or bailing every single BTR and AMX effectively shutting down my left flank to him.

Unfortunately, in a savvy move, Hayden would consolidate to the objective and stall my infantry with artillery fire. A few botched unpinning rolls later and he had the game in hand.

A tough loss turn 3 for me, but I jotted down lessons learned in my notebook and moved on to the next fight.

For my next fight, I opted for ‘Maneuver’ to my friend Nick’s ‘Attack’, and we rolled up ‘Counterattack’.

Once again I placed a pair of Bradley mech units and my Apaches in Reserves. I would spearhead out on my deployment, overwatching both objectives with fires. Nick would split his force between my left and right flanks, which coincidentally meant my reserves would come in right on top of half his force (a prospect I relished given the performance of my 25 mike mikes the previous match).

I played a bit more conservatively this match, with Nick pressuring both flanks, and eventually contesting the objective on my right flank or the “far” objective from my deployment zone. Of particular note is Nick got his aircraft every.
single.
turn.

His focus on SEAD served him well; eventually his Tornados started giving me problems. However, when my mech platoons came in from reserve the game turned into a bloody knife fight that we both thoroughly enjoyed. Retrograde engagements (a brad moves past marders and shoots at them parting shot style), missile duels between Jaguars and Bradleys, and copperheads popping zig-zagging Leo 1s. Game had it all. Eventually I conceded, not having the power to push him off the objective and knowing so. All in all a fun match! More notes, and on to the next one.

My final match of the tournament I opted to ‘Attack’ (finally) against my friend Blake’s ‘Defense’ with combined M113 mech. Our mission was ‘No Retreat’; one of my personal favourites.

I decided to counter-intuitively mass my forces on my left flank against the “near” objective even though his defense was concentrated there and I was attacking with light armor into a urban area (generally a no-no far as tactics go). I put my Brads into a gun line and advanced, using buildings as cover. After trading some fires, I managed to crack the defense and clear a path through his mines. I must stress, again, that the real money maker on the Brads is the cannon. Spitting out 30 shots a go in a small area will crack almost any defense open or stop any light armor punches. And it was this massing of fires that eventually won me the match.

For my first time really playing my Bradleys both casually and competitively, I think the tournament went well.
Unfortunately half the field had to drop due to needing to return home, so I got lucky to make the final four and ultimately place 3rd of 8. Hayden and Blake were 1st and 2nd, respectively, while my friend Keith rounded out the final four with his East Germans. So a middle of the field result, but more importantly to me I validated the ability of my list and what changes I want to make to it.

Bradleys proved to be very powerful, if used correctly (never, ever, ever defend!) and most importantly I got to enjoy good company with my team. It is my hope that when COVID passes, wherever you may be that you can have the same opportunity. Until then, may your dice roll hot!