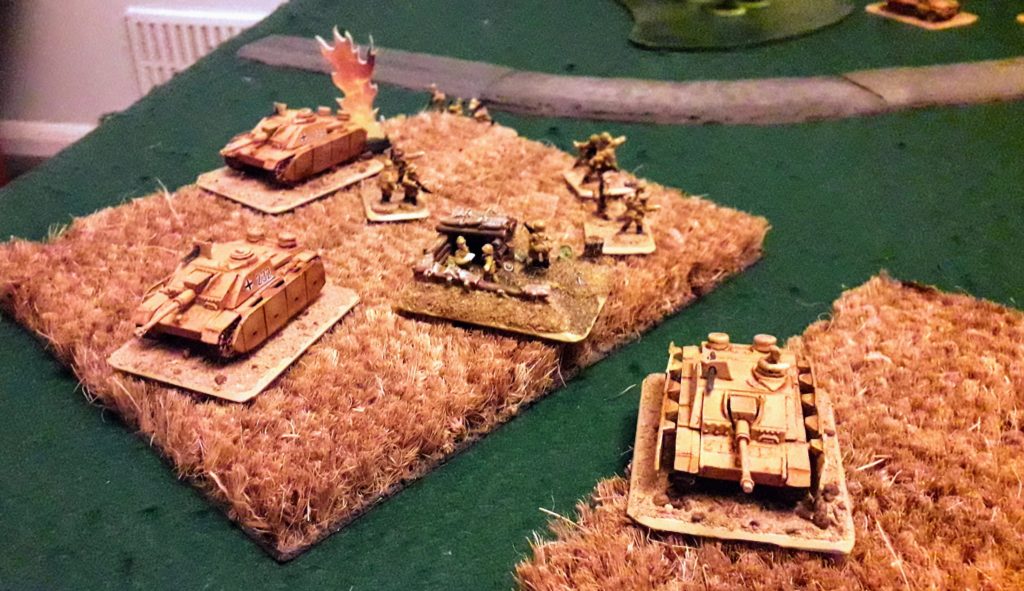 The final action of this epic battle saw the German 7th Panzer division push forwards hoping to trap and destroy two battered soviet divisions unfortunately what it encountered were no fewer than four Rifle Corps and 2 Tank Corps, a lack of reconnaissance would cost the germans dearly in this encounter. For full details check Lucas’s article on the Battlefront web site Battle of Kiev 1943 – Meleni encirclement

After the second game we decided to keep the points total high at 100 to ensure the Panzer forces would be fairly large, this is the upper end of what Lucas suggests in his article but would allow the germans to pick a reasonable sized (numerically) army with a good mix of later model tanks and mechanised infantry.
What arrived on game day wasn’t quite what I expected; the Germans had elected to dismount their Panzergrenadiers for the attack and support them with a mix of assault guns and some some very heavy artillery. I’ll apologise at this point for the poor quality of the photos, the lighting wasn’t at all good.

For the Soviets I chose to use a Hero Rifle formation from Enemy at The Gates as the core of my troops. To mimic the fact the soviet forces were much larger than the germans expected I took three rifle platoons, SMG’s, heavy mortars and an integral AT platoon. The AT platoon would be converted with the Infantry Guns command card to represent additional integral company assets. These are supported by 76mm artillery and both light 45mm and heavy 57mm AT guns.

I deliberately chose to have lots of units to try to recreate the feel of the soviets being able to feed more units into the fighting.  Reserves would prove a challenge as, with so many guns, I would have little infantry around to support them initially.  The Soviets could ultimately have a massive numerical advantage over the panzer army but it would take time to fully assemble and would I get them into play before it was too late?

The Scenario we rolled was Contact, representing the Germans pushing forward against the Soviet rear areas. The Germans put their StuG and AA assets into immediate reserves. My initial Soviet deployment was of just the SMG platoon plus the gun units with the 45mm AT unit in ambush. This rather concerned me as it left me very short of infantry but as the StuG unit would appear long before I got to roll for reserves I really wanted to start the game with my heavy AT unit in position as nothing else in my list was worth many points this meant I ended up with all three of my Hero Rifle platoons in delayed scattered reserve.  How well that would go only time would tell.

With the board set up with my heavy AT guns on the right flank I was fairly confident the attack would come on the left so I positioned my SMG’s left of center infront of my heavy mortars and my Zis-3 artillery on the left on the objective, this left lots of options for where to ambush with the 45mm guns later in the game. My basic battle plan was pretty simple I was simply going to try and pin the German forces down on the right for as long as possible and hope I could get some reserves onto the table somewhere helpful by turn 4.

The Germans set up pretty much as I expected with a strong right flank of two platoons, the Grille and Hummel platoons occupied the central area and the third platoon were left to cover the objectives I had placed.

A quiet turn really for the Germans.  They moved cautiously forward through the woods on the right, the unit in the center failed to ‘follow me’ and were left behind the wood in the center out of sight but vulnerable. Shooting pinned all the Soviet forces but there were no casualties inflicted.

Things started well with the Soviets all recovering from pinning and, looking at the table and the exposed panzergrenadier unit, I now made a fateful decision to move my SMG unit forward to occupy the wood in the centre of the board to blunt their advance.  This would make me easier to kill but it did allow me to open fire and possibly assault them. Shooting started well enough pinning down the panzergrenadiers at the rear and with the SMG’s getting a healthy 15 hits on the Panzergrenadiers in the centre.  Sadly, no one failed their save despite every stand having at least two hits! Just pinning them wouldn’t allow me to assault and now the folly of my decision began to dawn on me.

No reserves yet and the Panzergrenadiers in the centre, luckily for me, failed to unpin or dig in. The Grilles moved a bit closer to support them with direct brutal firepower against the SMG unit. The Panzergrenadiers on the right decided to await the StuG’s and moved back out from under the ranged in marker of the heavy mortar battery. The Hummel unit attempted to range in on the SMG’s, failing hopelessly.  My opponent knew that if this unit could be eliminated then the Soviet defence might well crumble before the reserves arrived and the StuG platoon would be on table next turn. Direct shooting proved much better for the Germans this turn and half the SMG unit was destroyed by the combined might of the Grilles and Panzergrenadiers.

I had few options at this point and was forced to pop my ambushing unit to protect my now battered SMG unit. Luckily the Kommissar was still alive and I recovered from pinning and dug in the remaining four SMG teams.
I elected to go to ground with the SMG’s and fired the 45mm AT guns at the one Grille I could hit. Even with the ‘volley fire’ card this shooting proved spectacularly poor and, through a combination of failing to hit and good rolls to save, I only succeeded in bailing out one tank!

The StuG unit duly arived and rapidly advanced toward my ZIS-3 position. AT 9 vs FA7 wasn’t what I needed!  These were supported by the Panzergrenadiers and German HQ. In the centre the Panzergrenadiers again failed to unpin but did manage to dig in and the Grille remounted. The Germans on their right flank now advanced rapidly (blitz, tactical and follow me) to pressure my AT guns and HQ making it harder for me to redeploy any reserves that might come on next turn on my right flank when they were needed on the left. Shooting saw a Zis-3 destroyed by the StuG and Panzergrenadiers whilst the battle in the centre raged on with 2 AT guns being destroyed by the Grilles. The Hummel battery ranged in on the 57mm AT guns but did no damage.

My platoons motivated but no reserves arrived making this a tough turn.  With the 57mm AT under the Hummel bombardment, I moved them back to make the Hummels range in again. My 45mm AT regrouped with a single gun moving to keep them in good spirits. Shooting saw the Zis-3’s engage the StuGs to no effect and the AT failed to hurt the Grilles at all. My SMG unit retained gone to ground, I figured whilst the germans were pinned and outnumbered me this was my best option. The 57mm AT and HQ, with a mere six shots between them, opened fire on the advancing Panzergrenadiers threatening my right hand objective. I spectacularly rolled six hits and killed four teams! This just left three teams which my HQ and guns should manage to hold off.

The Stug and Panzergrenadiers, with a ‘follow me’ order, move up to assault range of my Zis-3 unit and the central platoon finally unpin.  In a brave move, the Grilles manouver to assault the 45mm AT unit. Shooting pins my Zis-3, 45mm AT guns and SMG unit. The Panzergrenadiers on the left move to contest the objective killing one of my HQ teams and pinning them.
The Hummels fail again to range in.
The Grille assault goes horribly wrong and I kill one with defensive fire despite being pinned and one of my guns being flanked.  The remaining tank fails to hit and the 45mm destroys it at point blank range in assault. The Panzergrenadiers assault my HQ but, again, the fire from my 57mm teams is too great and they are stopped and another team is lost bringing them down to two teams. The StuGs assault the Zis-3s; one is killed in defensive fire as they charge in, one gun is lost and the remainder break off to prevent the infantry from assaulting them next. This leaves them more than 4″ from the objective so I would have to move back next turn unless my reserves arrived on this side.

I recover my moral and take stock. I would have to move the SMG unit back toward the objective and hope the remaining ZiS-3 guns and 45mm AT could eliminate the StuG battery or all would be lost. I couldn’t move the Zis-3 guns to get them close enough to the objective thanks to the StuGs consolidation move and my big bases. Now the important roll; reserves.  The dice roll cross the table and there is a five so now the Soviet Hero Rifles would begin to arrive, just when I needed them.  But ‘where’ was the critical question – I roll again and manage a 6 – just what I didn’t want!  They are placed over on the right flank, as far from helpful as they could be!

It would all be down to shooting; the Soviet gunners took careful aim and managed a respectable three hits (5+ needed) but the thick frontal armour of the StuGs prevents any real damage and only one tank is bailed. If it remounted the Germans would win in Turn 5. The Rifles duly dispatch the remnants of the Panzergrenadiers on the right.

Drum roll please… the StuG, thanks to the support of the German HQ remounts, and the victory is secured! With the new victory conditions the Germans play out the turn eliminating the SMG and Zis-3 units for an 8-1 victory.

I felt the game all hinged on my choice of reserve units.
In hindsight I should have put the 57mm AT and SMGs in reserve and started with two rifle companies. I wouldn’t have had such a strong defence initially against the inevitable StuG assault, but would have had much better numbers for dealing with the Panzergrenadiers and would probably not have been as reckless with them.
I’m pretty sure that with only RoF 1 troops I wouldn’t have attempted the move to get an assault against the exposed unit in turn 1.

Overall the campaign has been great fun to play and well worthwhile and I’d recommend giving it a try.