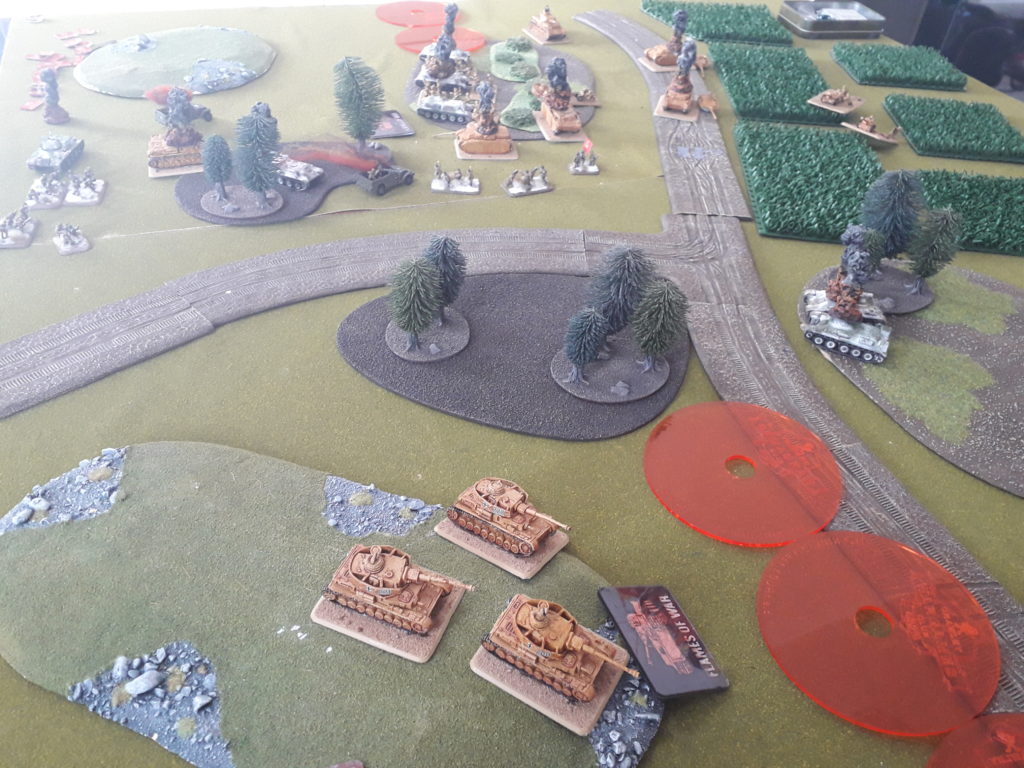 With the arrival of Hermann Balck’s XLVIII Panzer Corps, including the SS Division Leibstandarte, 1st Panzer Division and 7th Panzer Division things turned in the Germans favour. The soviets sent the 7th Guards Tank Corps to counter the German assault. A huge tank battle ensued, which continued for nearly a month, when the autumn mud halted all operations.

The second scenario Panzer Counter Attack in this series of linked battles covers the German counter attacks against the Soviet forces. To represent this we played the fighting withdrawal scenario with 120 point forces to enable the Germans to form some strong Panzer units, whilst the Soviets would be represented by a hero T-34 Battalion both forces are shown below minus any scenario bonus units

With this scenario and the way the Germans deployed my plan was pretty simple I had created a gap in my minefields between the objectives to try and lure the Panzers into and it looked to have worked. One T-34 platoon formed one side of this channel in the scrub, another platoon the right in the central wood, my HQ and Zis-3 artillery unit supported by the Armoured Reconnaissance Platoon would form my fire base opposite the opening, leaving my ZiS-2 AT guns in ambush to be deployed into one of three areas; the scrub, the central wood or the right hand wood. The final T-34 platoon would make a long drive around the German left flank using their rapid dash speed to try to get behind the Panzers where my AT9 could be more effective. The SMG platoon and mortar battery were safely dug in behind the minefields between the wood and urban area. The only way for the Soviets to win is to break the German formation but with the ever decreasing resources I would have available due to the Strategic Withdrawal rule I would need to strike hard at the Panzers before I ran out of platoons capable of holding them off.

Everything started off well with the Panzers advancing albeit slowly through the crop fields and my units staying concealed and gone to ground to minimise the early casualties, the Pak 40 unit proved particularly disappointing failing to hit anything then ending up under a sustained bombardment from the Soviet 76mm artillery and being forced to move reducing its effectiveness further.

With the German infantry trailing the attack I placed my ambush in the scrub to counter the Panzer IV’s, but this only succeeded in knocking out one tank and I was too cautious to move my recon infantry up to support them, which would prove an error later on in the game. I had by now withdrawn the mortars and the lone remaining T-34 from the scrub platoon was next. I was running out of options on what to remove next and had only killed one Panzer IV for the loss of 3 tanks.

The German turn 4 sees them get more decisive with a push by the Grenadiers and Panzers through the scrub and they overrun the unsupported Soviet AT position (should have moved my infantry!), the Pak 40’s again redeploy as my flanking T-34 force is now behind them and getting into assault range. I withdraw my Sturmoviks (scenario bonus unit) which haven’t shown up at all!

Turns 5 and 6 saw a massive exchange of fire between the remaining T-34 platoons supported by the 76mm artillery and the Panzer IV’s due to the positions of units I was unable to target the German HQ tank and despite breaking one platoon the Panzer formation was still fighting with the HQ tank pulling back to ensure they would not break. On the downside the Germans removed the central T-34’s and all but one Zis-3. I was now down to a single heavy gun anywhere near the threatened objective!

Turn 7 saw strategic withdrawal hand the Germans victory unable to remove my two remaining formation platoons (a lone T-34 and my SMG’s) I had to withdraw the Zis-3 or the Reconnaissance platoon opening up a massive hole in my defences which the remaining Panzer IV platoon could exploit moving around the woods and the back of my minefields to capture the now unguarded objective as well as managing to kill the one remaining T-34 to boot!

What a game! This is the largest point game I have played mid war so far and it definitely felt a better game than 100 pts might have for these tank based forces on the Eastern Front. Overall my plan worked pretty well and with some better dice and possibly getting the aircraft onto the board a victory could have been achieved. So the fate of Kiev still hangs in the balance with just the final scenario to go.