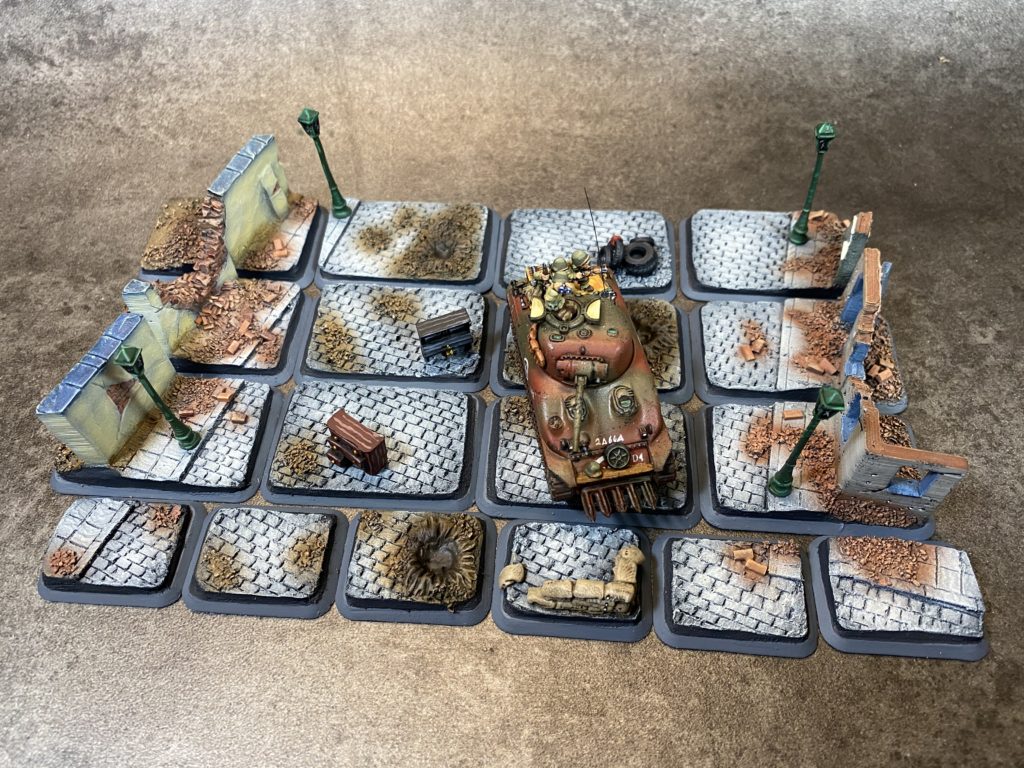 Faces, Bases, Something, Something: Bases before faces

When building a new force for Flames of War, I like to put in some effort to make it look as good as I possibly can. I am a slow painter and try to add as much detail to the models as I can, but if the bases they are placed on doesn’t get the same level of attention the minis won’t stand out and will look no better then minis that took half the time to paint. So I made this little guide so you can try yourself to make something special for your own troops.

First up you need an idea of how many bases you need and what the theme should be. The amount of bases sort of gives it self, but in my case I want it to be used both for a US Rifle Platoon and a US Armoured Rifle Platoon(ARP). This pose a little problem as the Rifle platoon can be 7-10 bases incl. the unit leader plus 1-2 Bazookas and the ARP is 4-6 Rifle teams, 4-5 Bazookas, 1 60mm Mortar and 2 LMG’s. This gives me four possible configurations – not helpful when trying to get them all to sync up!

What all this showed me was that if I kept the middle 6 medium stands rather generic I could do the “diorama” bases on the 6 bases on the left and right.

As for the theme, the bases needed to be used for my US Sherman force in operation COBRA in Normandy 1944, so a french village or street would look nice. I had seen Rubén Torregrosa made some urban bases on his blog  Heresybrush and I had also resently painted some wonderful urban bases from Enrique that made me want to try something like that. So with all that in place I set about to start.

For the cobblestone street and sidewalks I used DAS air drying clay mixed with a little bit of white glue to ensure it would stick together. To get the right sizes for the bases I made 2 templates out of some vinyl so I could cut the clay while it was still wet making it a lot easier. If I had just used the bases themselves the clay would have been a little too big because the Battlefront bases has bevelled edges. I used an old tile as work surface to be sure the clay wouldn’t stick.

After the clay had dried for an hour, I stated cutting the patten of the cobblestones and the tiles in the sidewalks. As you can see I didn’t cut the line perpendicular to the edges in an attempt to make the hole scene look more dynamic, this was a trick from Rubén. In the photo you can also see the sidewalks furthest to the top right.

Now it was time to add some of the scenery, on the left I added a piece of wall bought from Peter Pig, that I cut into suitable sizes and on the right hand side I added a ruined house 3D printed by one of the members of our local gaming club. Again doing this while the clay is still relative soft makes it easy to cut with a normal hobbyknife.

After the Clay had dried overnight I losende it from the tile with a knife and glued it to the bases with superglue and added some extra stuff to the middle 6 generic bases. Streetlight from Enrique, furniture from Peter Pig and Jeep from Battlefront.

The edges of the clay was now sanded nice and smooth and spatula added around the edge and inside the ruined house.

To add some life and contrast to the bases some bomb craters and rubble was now added using fine basing material from The Army Painter and Green Stuff. As always when working with green stuff I mixed too much so I made some sandbags and also made a ton of bricks to scatter around the bases.

All colours used are Vallejo unless mentioned.

Starting with 2 layers of black primer I made sure that there was nowhere the white clay could be seen.

Brickwork was painted with a mix of Black Red and Buff 50/50 and craters with Medium Camo Brown.

The ground is Flat Brown, drybrushed with Beige Brown and Light Brown. Here you can also see the 3 different test colours on the base rim. London Grey, Beige Brown and Black.

Now the fun begins. As the ruined house is 3D printed, it has printlines that don’t take dry brushing very well, so I decided to put wallpaper on the inside to add some life and colour. Now for anyone of you that want to try this at home, I can only recommend doing this before putting ground cover/rubble on the bases, cause it was hell to make it fit around the rubble.  After applying the wallpaper I roughed it up in the edges to make it look more at home in a ruined building. Here is also a clear view of the door made from plastic sheet cut to size.

The wallpaper was uploaded to a FB group by Ignacio and you can download it here.

The outer walls was painted with Sinai Grey 82 and UK Bronze mixed with a little Buff to lighten it. Door frame and windows is Prussian blue and white and the bulletholes is Black with a thin line of White to catch the eye.

The tire pile was painted Black and the tire rim Dark Metal Grey and highlighted with London Grey and Silver.

To tie it all together I finished with a very light drybrush of Buff and then it’s off to paint the infantry. After putting minis on the bases shell cases and pigments will be added to give even more life to the bases. Finally here is the 4 different configurations from the beginning.

Thanks for reading through all to the end, I hope you can take some tips and tricks with you and start basing big time.