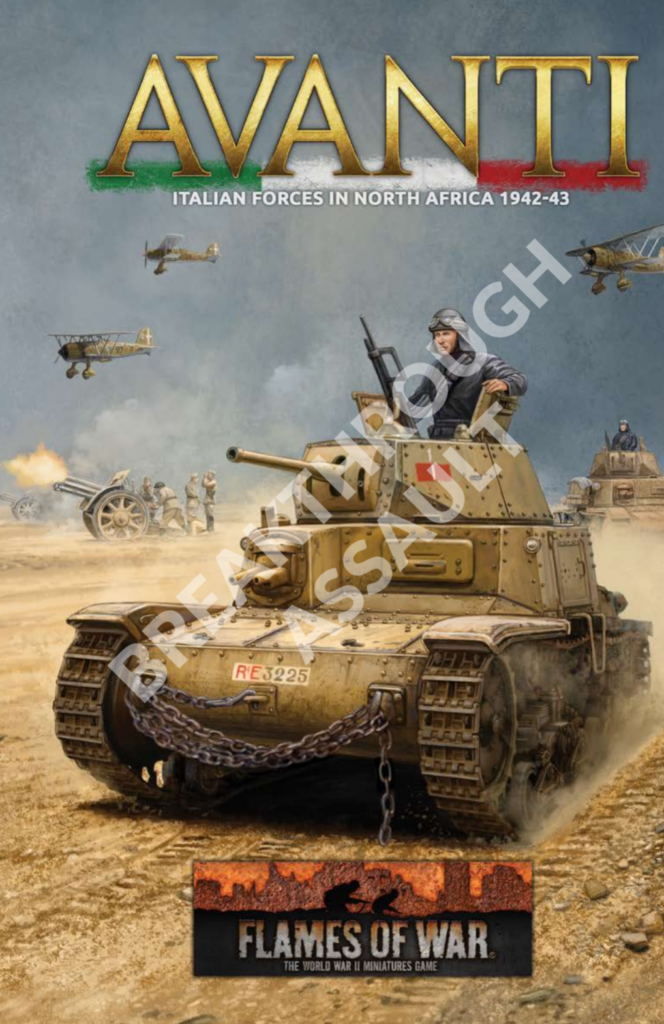 Good morning everyone, Jersey here with our first look at the new Italian book for Mid-War:

A few years ago now when I was asked to contribute a few articles to Breakthrough Assault as a guest writer it was because I’d been building my first Flames of War list which was for the Eastern Front. I’ve always wanted a mid-war desert army but wanted to wait until the period was redone; so when we got sent a copy of Avanti to review the long wait was over!

I wasn’t disappointed either! Three interesting and different companies with great support, all the usual quality historical background, rules, painting guides and some awesome photos for inspiration. New to the mid-war books though is the allies section at the back which gives you the rules for German core platoons you can add to your Italians! These allies are improved for the Italians as they can draw on not one German platoon but two!

I always liked the Italians for their courage and defiance in the face of difficult odds being thrown into a conflict before they were properly supplied and ready and making do with what they had. I enjoyed reading the historical section of the book about 1942-43 and the movement and conflicts of their forces in the desert, this is then well reflected in the game: Italian national rules really reflect their diversity and tenacity with a new variant of ‘8 Million Bayonets’ making a reappearance along with new shiny dice with all the new box sets. There’s a 1/3 chance that your units get a better rating profile which is a lot less random than the old V3 tables.

‘Avanti’, ‘Determined’, ‘Focused’ and ‘Protected Ammo’ add more flavour to your Italian force and all affect your unit rating profiles. ‘Focused’ is the only negative (in terms of stats not rules) out of the four which gives your tanks lower tactics ratings as they are having to focus on gunnery.

Then, the best bits; Italians get special rules for their assault engineers who are very good at breaking through minefields and they carry flame throwers. Some of your guns also have “Effetto Pronto” HEAT rounds meaning you can lash out at long range without penalty. This will allow your Semovente Assault Guns to take on Shermans or weaker at distance as they will not have the armour bonus for being at long range, keeping the AT8 guns viable. The first formation is a tank company and is comprised of M14/41 tanks and Semovente Assault Guns (75/18). This makes the new army deal box fantastic as you can get your command platoon and two platoons of armoured vehicles out of the box at a discount. Yes you’ll want some more, but I don’t see why you wouldn’t get a second army box as then you’ll have both possible batteries of 100mm guns.

These tanks are cheap; not necessarily Honey cheap depending on what you select because they have some good ratings and rules, but you’ll be able to field a lot of them if you want to. We’ve already talked about the usefulness of the Semovente in the special rules section above, but it also has a bombardment making it very versatile!

The M14/41 tank may not stand up to a Sherman front on and may be outclassed by top level Panzers (which of course you can use to bolster your Italians as allies) but you’ll get a lot of M14/41 points against these bigger tanks. They’re quick, especially when follow me is used and can give anything except a Tiger trouble on the flanks, even at range due to the HEAT rounds to fires. Another big plus is six (6) SIX machine gun dice out of every tank (and self-defence AA) that mean a full platoon of M14/41 tanks fires 30 times if this weapon is selected! Next is the elite infantry weapons company that’ll be familiar to those of you who have played Italians in the past. The platoons have lots of integrated heavy weapons and they’re backed up by even more 47/32 anti-tank guns. You don’t get many teams per platoon, a little like a German infantry platoon, but they have the firepower and anti-tank to be an effective roadblock and a threat to light armoured vehicles.

The 47/32 counts as an infantry heavy weapon rather than a gun team making it as versatile as ever and it carries HEAT rounds as well! You can buy a minimum strength company for relatively few points and a platoon of these counts as a core platoon making it easy to incorporate some infantry into your tank company to hold an objective as a combined arms list.

OK, so we have seen some criticism that there are no regulars in this book, but I don’t mind. As I put it to our group chat, any troops that wear feathers and impress Field Marshal Rommel have to be cool to collect! This version of the Bersaglieri have lots and lots of rifle teams, Brixia Assault Mortars, 81mm Mortars, Heavy Machine Guns and more 47/32 anti-tank guns. However, before we worry let’s wait for the command cards: we may see options in there for more infantry formations, L6/40 and Armored Car formation and that classic Italian unit that was motorcycle recce.

The Assault Mortars don’t fire bombardments but follow your infantry into battle firing a lot of firepower 5+ shots over the top of them making them a very interesting unit! The 48” range of the Italian 81/14 Mortar on its bombardments makes them a great pick and we have already discussed the 47/32 anti-tank gun is a good infantry support weapon. The Italians have a lot of good support anti-tank guns so don’t worry about its low anti-tank rating if there are Churchills or Shermans on the other side of the battlefield.

Italian infantry are trained and confident and aren’t expensive, but with a 1/3 chance of being even better on the 8 Million Bayonets and special rules to help them assault quickly across the table an infantry formation could be worked in alongside tanks or a viable core formation on its own as it will be able to defend and attack. More infantry! Assault Engineers were always a staple third infantry platoon in my old Italian V3 lists and I think I’ll be picking up a pack as they are the first Mid-War unit dedicated to breaking through mines and using flame throwers and smaller bases of Brixia Mortars to make them a great platoon! However, they are not cheap and a full platoon of 9 stands will take a chunk out of your points pool.

Armour cars and light tanks next. The cute little L6/40, the first model I ever painted for Flames of War, makes a return and works as a viable alternative with its tracks and heavier armour to the excellent AB41 armoured car. I predict a formation for these in the command cards but with Italians being an aggressive force, the Scout and Spearhead rule on both units on some missions you’ll be able to extend your deployment zone and get your tanks and infantry closer to the enemy! I mentioned above that Italians had some good anti-tank in the backfield. Not only have the Germans lent them some 88’s but they brought their own 90mm version on the back of a truck with a gun shield. Both can be brought in platoons of four giving you some heavy anti-tank support or long range direct fire options. Whilst they can’t fire and move, the truck mounted 90mm guns can redeploy making them tactically flexible, if vulnerable if tanks came up and had a go at them with better firepower.

Next is the artillery and the 100mm guns provide good medium bombardments, smoke and emergency anti-tank support. They do just what you’d expect and are similar to American 105mm guns. You can get an AB41 OOP which is a little more fragile than a Honey or Panzer II but will do the job of spotting for your guns.

Last up is air and anti-air and Italians get biplanes! The CR.42 Falco gets to return as a bomber with machine guns to give you something to pick on the enemy back field hunt units like Marders! The Truck mounted 20mm platoon provides your armies with air cover with a full platoon of four having a slightly below average chance of bringing down an aircraft so over a couple of rounds. Of course they also provide cheap, mobile massed firepower at firepower 5+ so should not be snubbed just because they aren’t likely to down Hurricanes every round.

PS… Whilst they aren’t Italians the Panzer IV, Panzer III, Africa Rifle Platoon and 5cm Tank Hunter Platoon are included as allies in the book with full rules and points to make it easy to add a platoon of Germans and as I mentioned before you can have two platoons! The painting guides give you several different ways to paint your Italians including camouflage and weathered schemes. The infantry, guns and aircraft are also covered as you’d expect as well as a section on unit markings and this is a good section to the book that makes good use of paints being released in the new Italian paint set and spray being released alongside the book.

The Italians present a slightly different painting challenge to the Germans, British and Americans. Their tanks are riveted, angular, small and covered in details whilst their infantry have lovely uniforms that an experienced painter can get a lot out of.

An Italian force is certainly good in the game but there’s no escaping the look on the table that the Italians are outclassed with their weapons and tanks, but they’re still brave and flamboyant with feathered helms topping every Bersaglieri figure. You can use this to your advantage to create a truly dynamic force of “Iron Hearts, Iron Hulls” (Ian W Walker 2003)

I’ve been waiting for this for a while and I got what I expected based on the last year of the new Mid-War and Version Four. I’m happy with the book and it’ll add a good, exciting force into the mix alongside the other Mid-War lists out so far. The Italians have their own themes and trends and have lots of viable combinations and lists buzzing around in my mind.

Next I’m hoping to see and review the command cards next as I plan my pre-orders and several formations worth of Italians!

I remain excited and am putting chunks of Christmas money aside to pre order lots of new Italians and look forward to trying them in the New Year with some new players who have just started playing Flames of War as a group in Southampton!