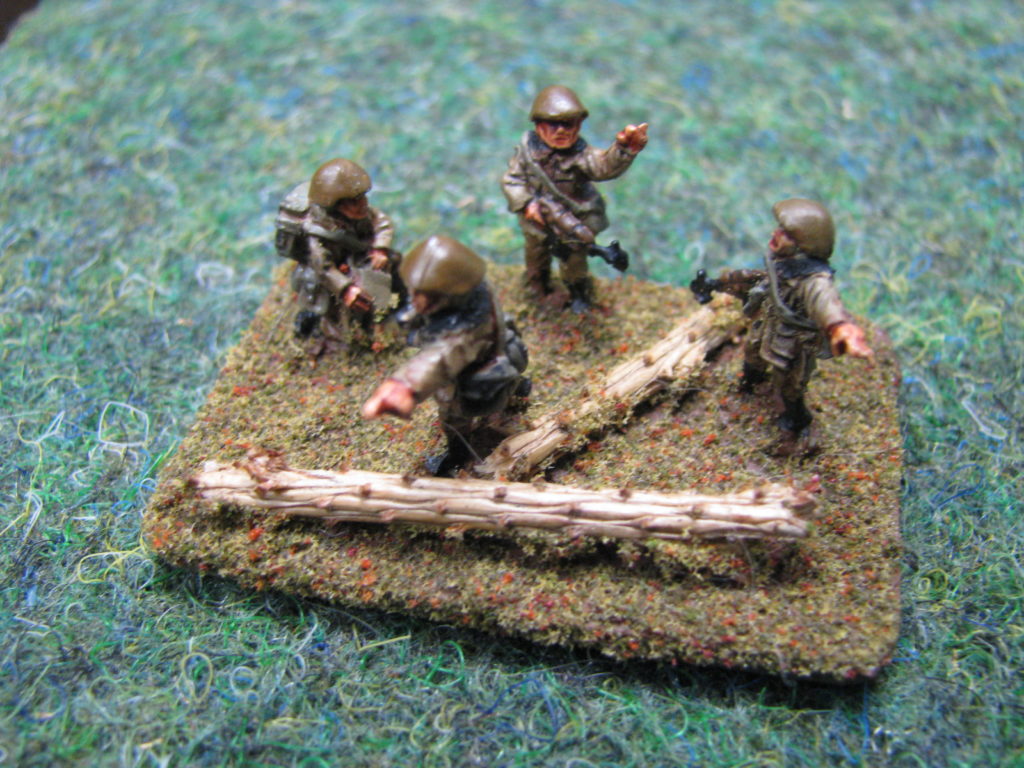 As some of you will know I’m a big fan of Keith Armstrongs ArmiesArmy range, and AA are a sponsor for the page. So I was happy to get some of Armies Army East German Infantry to review.

Like the Afgantsy that we reviewed previously the figures come in Winter dress and are crisp and clean with minimal flash to clear up. They are quite “chunky” which is one of the reasons I like them, firstly because they remind me of the Mikes Models figures that I built my first wargaming armies with in the 1980s and secondly because they really suit my painting style, which is block paint and wash, the deeper recesses possible on a “chunky” figure really bring the washing out and make the figures pop.

There is a nice range of poses, there are 3 leader poses, 2 LMG poses, 2 RPG poses and 4 Riflemen poses.

In addition to the figures currently available on the ArmiesArmy webpage, Keith sent us some of the new poses which will be available soon; a couple of figures using the RPG-18 (standing and kneeling) and some heavy weapons figures (SA-14  MANPAD launcher and AT-4 Spigot ATGW launchers). Keith is hoping to have these available soon.  The RPG-18 figures certainly are a nice addition to the range.

As previously indicated the figures really suit my painting style and I enjoy painting ArmiesArmy figures much more than say PSC or Battlefront infantry, though of course this is a very subjective view.

As the figures are in winter dress, I did a bit of research and found that the winter smock appeared to be a slightly lighter colour than the normal battledress.  As such, I went with an overall spray of British Armour (Italy), and then painted the trousers English Uniform as per the painting guide. A couple of re-enactment guys on the facebook forum indicated their NVA webbing was nowhere near khaki so I’ve been using grey green instead.  Finally, the helmet I painted English uniform.

They won’t win any painting prizes, but having figures I enjoy painting makes a big difference for me as I’m one of those wargamers for whom the gaming is much more enjoyable than the painting.

Hopefully Keith will have the NVA heavy weapons out soon, the moulds are nearly all done, but as you’ll probably know he’s been busy with the crowd funded projects he does so well recently, anyway here’s a photo of the SA14 to whet you appetite

A really really solid addition to Team Yankee, these figures are detailed, great to paint and have a good variety of poses. My East German Infantry company is made up almost entirely of these guys, and I really like them.

Between me finishing the article and it being published Keith has announced that he has transferred the ArmiesArmy Cold War range to the Plastic Soldier Company (PSC), yes we’ve noticed the slight contradiction of PSC selling metal figures. We’re not sure how Will at PSC will chose to market and sell the range going forward e.g whether he will continue to sell squad and platoon packs or do something different. But PSC is a good company and we hope that this range of excellent figures will have a long production future. At present orders are not being taken whilst the transition takes place