Alex learns how to… Cromwells

So this is the start of what will hopefully be an irregular series. I’ve moved away from the south coast
up to the Midlands, this is halfway across the country, or if you are American, the distance to the shops. Anyway, I’m no longer near Ben and Adam and Winner, but I am now near Steve Charlton, the UK number 1. So the plan is that Steve will show me what I’m doing wrong with the various armies I can’t get to work for me and show me how to do better with it. I then write it up so that it’s not just me who benefits from Steve’s expertise.
Cracking idea right?

Anyway, one autumn evening I made the drive to a secret location in the middle of nowhere to Steve’s top secret lair with my Desert Rat Cromwell list. If you are a long time fan then you will know of my love/hate relationship with the Cromwell cruiser tank and my ability to screw up with them in pretty much any situation. 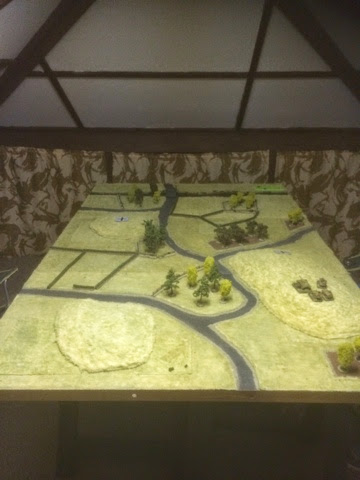 We decided to play surrounded (as it’s one of the many missions is struggle with with cromwells), and agreed that the river would be fordable but slow going and require a bogging check (we’ll touch on this later).
Steve set everything up except his ambush in the middle ready to get crushed beneath my tracks.
I then set up with my tanks split one  on the riverbank, one behind the hill on the diagonally opposite corner in order to threaten both objectives. The infantry set up to ford the river and take cover in the woods ready to push on when things had been softened up by the tanks. The sextons deployed behind a hill and the M10’s took aim for where the StuG’s were. The recce got ready to push forward and start lifting gone to ground.
Then Steve took a look at it and pointed out all the flaws, which is why there aren’t any pictures of it. Steve pointed out that I was splitting my forces badly and would be better placed concentrating on one objective rather than doing a half hearted attack on both. He also suggested that it would be better to use the M10’s as an area denial tool on the far side of the river where they had a wide line of sight and could stop the StuG’s coming out to play. He then let me follow his advice so the set up ended up like this: 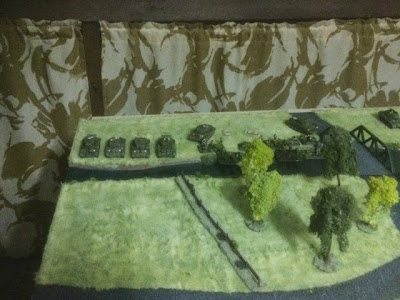 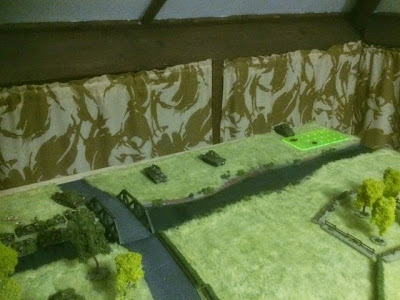 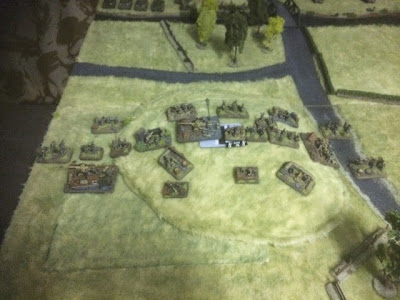 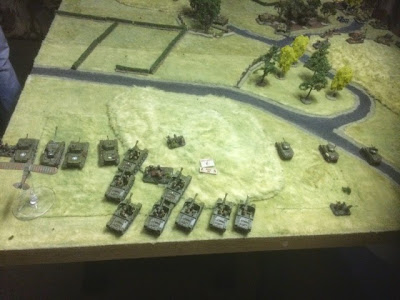 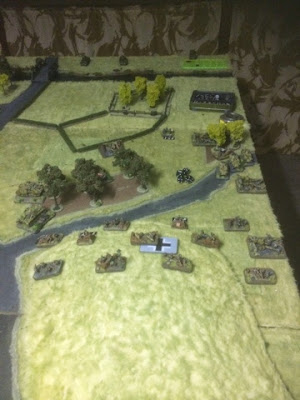 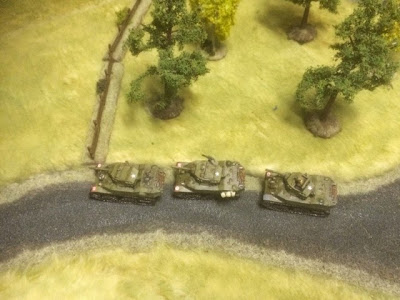 Then it was time to suck my stomach in and hope that the German return fire wouldn’t go straight through the front of my ridiculous flat glacis plates.

So, things went quite well for me when Steve tried to move the StuG’s into position and bogged 3 of the 4. No chance of an improvised recovery vehicle here and Steve kept the final StuG hidden and still to avoid making things worse. 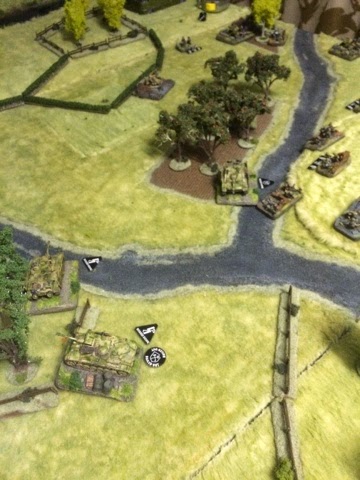 To minimise the downsides of this turn of events, Steve smoked my Sextons and 2nd Cromwell Platoon. 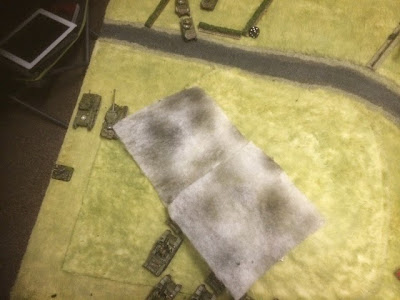 So after a pretty lucky (for me) turn 1, I had to try and turn luck into success.
The 1st Cromwell Platoon stayed still and opened fire, while the 2nd Platoon moved the two Cromwells out of the smoke while leaving the Firefly and last Cromwell behind to maximise their fire rate to try and kill some StuG’s who had got the wrong sort of leaves in their tracks. This also had somewhat limited results but did bail a StuG. 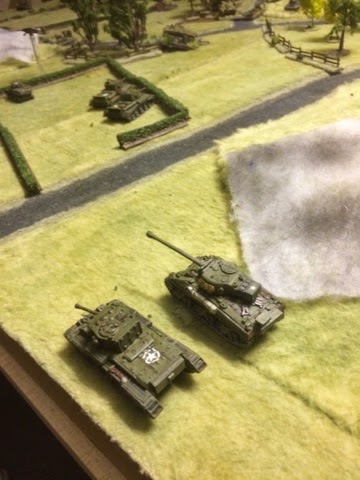 Another smoke screen came in to try and cover the PaK 40’s, but the second one moved to cover the Left hand side SS in order to stop them destroying the second Cromwell platoon and the Stuarts. 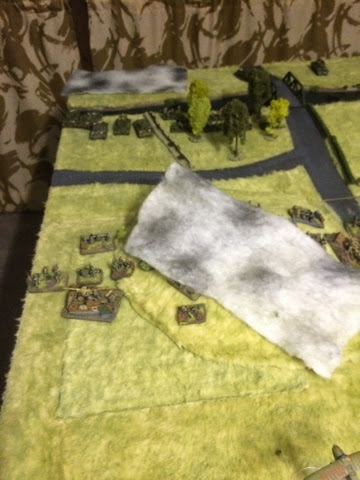 Steve then had a slightly delayed revenge strike. This bailed a lot of Cromwells and smoked some as well. At this point it appeared neither of us could kill anything more crunchy than a half track. 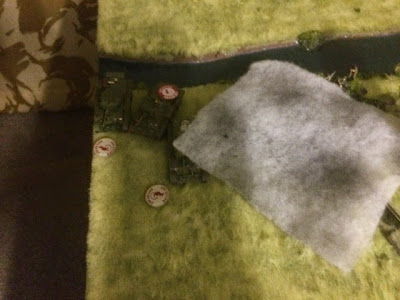 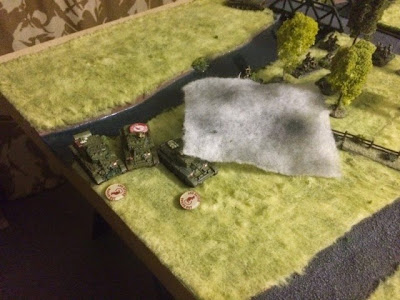 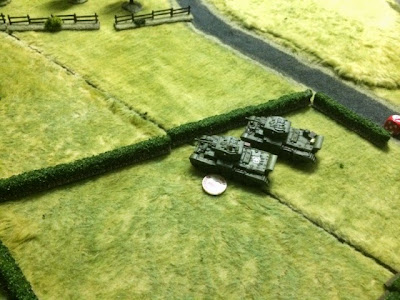 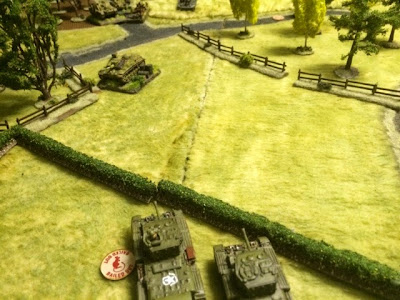 Over the next few turns, my artillery ranged in on the Right hand objective, the 1st platoon of Cromwells exchanged a lot of fire with the PaK 40’s, eventually killing them and the 2nd Platoon eventually saw of the StuG’s, though both sides really made a meal of that firefight.

My infantry waited their time in the woods…

After the death of the PaK 40’s, the game moved into a second stage. Steve needed to do something in order to stop me rolling over the now pretty depleted defenders of the left objective. He anticipated their eventual demise and started moving over the other platoon of infantry, however made sure to keep at least half the platoon dug in by the right hand objective in order to stop me being able to break the platoon. There was soon a string of SS troops stretched across the table.

I brought up the M10’s and Challenger to add additional MG shots to my attempts to kill the Shrecks before the reinforcements arrived, the M10’s 50 cals were looking pretty tasty for this.

Which they did, finally clearing the objective, but too late for me to be able to take it without having to fight off the newly arrived infantry, who promptly scragged the M10’s and with a little  help form the 10.5’s the 1st Platoon of Cromwells.

Next up, it was my infantry’s turn to try and save the day. They had been hiding in the woods until now, safe from the annoying MG’s being held by the SS. They came out, they assaulted and they counter-scragged the reinforcing infantry bar one or two stands who dug in on the objective

I then brought up the Sextons to use them as assault guns, figuring their 3+ firepower would help dig out these pesky Nazi Boy scouts. Just as they arrived however, the final stands got killed by the remains of 2nd platoon and the Stuarts and then Steve failed a company morale check and the HitlerJugend snuck away to be evil another day.

I’m not entirely sure how I won this game, and think that in reality, Steve beat himself here, aided by some pretty appaling luck with the StuG’s.

After the game, we had a bit of a debrief.

With regards to my list, Steve said it was pretty good, but it would be better with 4 less Sextons and something better instead, possibly a breaching group in order to be an auto attack list (important as it is a pretty poor list to defend with). He also suggested swapping out the infantry for more M10’s to make a better anti tank option.

As general tips to using the list (and on Flames of War in general) we talked about the importance of keeping platoons alive and fighting, this linked back to the use of improvised recovery vehicles and sacrificing 2iC’s to keep platoons functioning. After all, you only fail company morale checks if you actually have to take them. If your army is alive, it doesn’t need to worry about running away.

In terms of winning the game, Steve explained that it is not about killing the enemy, and that you have to play to the mission. That meant in this game it made a lot more sense for me, as a mobile army, to target one objective hard, rather than make a half arsed attack on both objectives and Steve’s whole army. It also meant that when I had worn down the original defenders, Steve didn’t give up, he anticipated it and fed the reinforcements in at exactly the right time to really annoy me.

Steve also pointed out that bringing up the sextons to use as assault guns was a sensible move, but I had been a bit uncautious with my placement and he was in position to use some AA guns to shred them if he hadn’t failed the company morale test, which would have put me very close to a company morale test myself. Again, even when you are going for the kill, try and keep your guys alive…

That’s it for this one, we’ll see what happens with the next awful army I ask Steve about using, my Late war Stuart Horde is one I’m thinking might need some help…