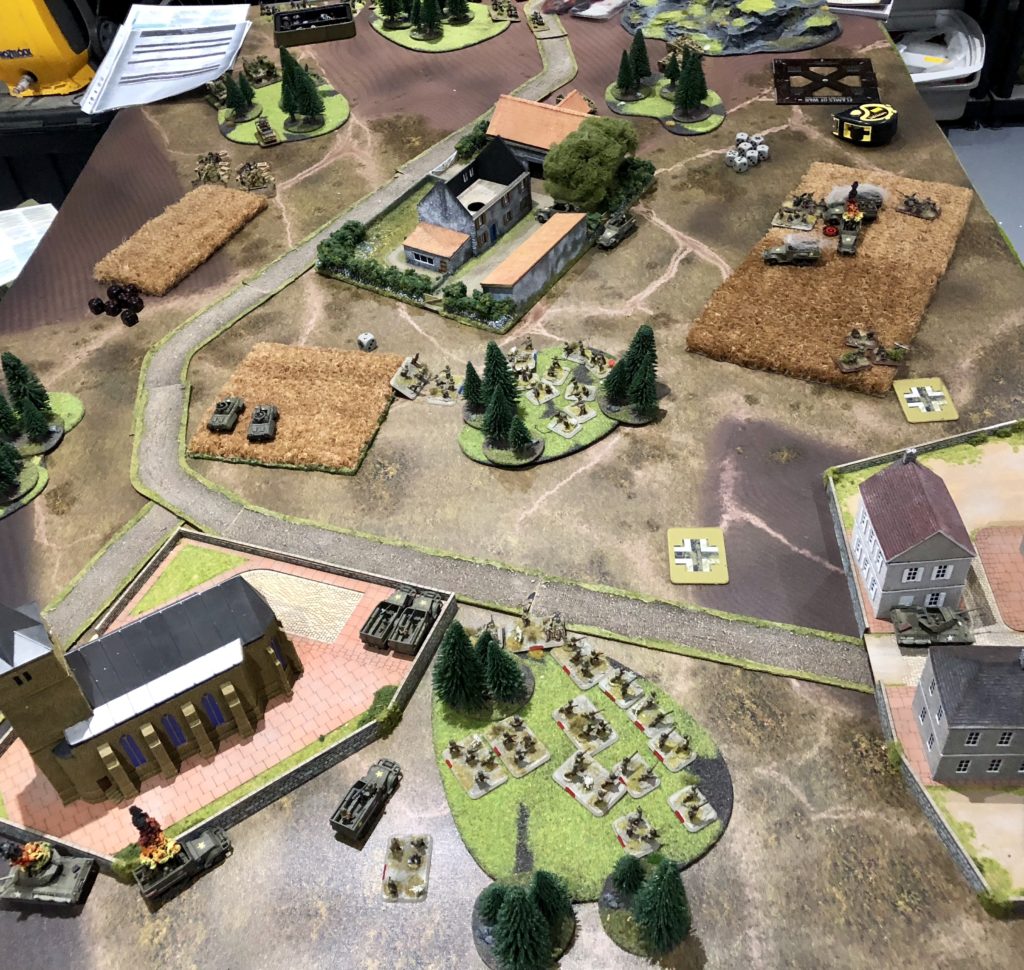 I know you shouldn’t start with an apology but… I haven’t got many pictures.  I wasn’t planning to write this up but it turned out to be such a good game, that I wanted to share it.

My Opponent last week was a returning player called Gary who, in normal form fancied fielding his German medium armour. I opted for a US Armoured Rifle Company, albeit trained not veteran, which I have never tried.   We settled on 1600 points for the game limits.

For my US I fielded

Using battle plans, with Gary adopting ‘manoeuvre’ and myself ‘defence’, we ended up with Gary attacking on ‘Breakthrough’.

I chose to deploy driven less by my own quarters but more to force him to either deploy, or place his objectives, near the small village. The former would choke his deployment whilst the latter would make for a difficult end-game fight for him, clearing objectives of my infantry in the surrounding buildings.  In the end he wanted the space to deploy so put his objectives near the village but outside of 4 from any building.  So much for that plan!

I left the tanks, priests and mortars in reserve with the guns in ambush.  The ARPs set up ready to rush the objectives and the M10s hid behind the church, waiting to see where the panzers went.

Gary put one set of panzers in ‘Flank March’ and deployed the rest of the tanks together to loop around my right flank with the 88s stopping my armour coming around the left.  The panzergrenadier set up ready to push for the farm house in the centre.  Due to the mission the recce didn’t have a role to play as Breakthrough doesn’t allow any room for a Spearhead.

I’ll be honest, turn 1 saw my deployment mistakes exploited.  His Stuka came in and caught the M10s behind he church.  The 50cals did nothing and I lost 3 plus a couple of half tracks.  Very much OUCH!  I really should have left them in ambush – the guns are way more survivable. In the centre, the German infantry pushed forward to threaten my Recce patrol hiding behind the farm’s hedges.  The recce moved to shoot them up and the panzers started to loop around the right flank killing a couple of half tracks as they went.

The 88s whiffed vs the recce but the motorcycles killed off the Jeep.  The infantry assaulted and got in, however, couldn’t crack the scout’s armour succeeding only in forcing the recce to break off. The infantry consolidated into the farm ready to threaten the ARP in the wheat field.

In my turn I got no reserves and the surviving M10 didn’t run.  He started to head for the small village.  The ARP near the church advanced towards the objective and the other ARP split up; some rifle stands going forward to assault the farm but with the bulk of it going towards the objective.  The ambush was popped in the wheat field but it wasn’t a great spot with two guns at long range. Their transports headed off towards the objective as well.  I had a feeling they would be needed later.

Shooting was poor, only managing to pin the infantry and bail a single Pz4.  In the assault I got pushed back, but in the process I gutted the German infantry for the loss of 3 rifle stands.  They would fail their spirits test next turn and run.

With the the guns having failed to kill any Pz4s and all of them remounted, they blitzed forward and shot one up while the wespes ranged in and took another team off me.  The motocycles started shooting up my ARP as they raced to the objective, past the farm. However, in return, they were shot up by multiple halftracks, LMGs and carbines forcing a rout.

The single tube mortars in the ARPs were ranged in on the 88s but couldn’t kill any due to the re-rolls. On the left flank the ARP took up positions in the tree line by the objective, ready to pounce on any panzer reserves.

Another round of shooting by the panzers and wespes finished off my 57mm guns and one of the ARP mortars.  The ARP was now starting to be whittled down and my right flank was pretty open with no armour or guns to protect it. I also lost my recce to the 88s.

My tanks had finally arrived and lined their front armour up vs his avenue of reserve approach, hoping they would come on!

My plucky remaining M10 also thought he had better nip back behind the lines to ‘regroup’. The ARP over watching the left objective while the right ARP and halftime tracks make the motorcycles rout in the top field.  Meanwhile the panzers push on the right.

Still no reserves for Gary which was rather annoying as I couldn’t risk moving out and giving him my rear armour.  His Panzers started to advance again pouring fire into my ARP on the wheat field who couldn’t dig a fox hole to literally save their lives.  Luckily the 3 zooks from the guns did dig in but are only 1 death from poor spirits.  His air failed to come in which was rather fortunate as my armory had to bunch up.  The Wespes had a crack at my ARP in the woods over looking the village.  There was no way I was sitting there under a repeat bombardment so dashed forward to the safety of the village, hoping to still be able to help both objectives. The remaining mortar bagged a 88 and his mate bugged out.

The priests and mortars also arrived and took shelter behind the church.

Gary’s reserves finally arrived and he immediately popped a 76mm Sherman.  His air cane in targeting the Sherman’s shrugging of a lot of 50cals before being killed by a plucky MG shot!

The Wepses had no luck ranging in and their observer started getting attention from my mortars.

Panzers continued to whittle down my ARP who hadn’t dug in (they finally did on my turn 5).  In response to his fire I dropped smoke to screen them.  I just had to hope that I could plug a few in DF next turn and with my own shooting.  Unfortunately my Sherman’s only bailed a Panzer 4 however it was captured by a rifle stand as the ARP took up a better posistion in the village.

His panzers in the wheat field positioned to assault, and pinned my ARP.

His outflanking Panzers killed another M4A3 Sherman.  In return, I moved my jumbo and 76mm out, keeping the 105mm stationary to try and hit the panzers on the right flank.  It was my last gamble.  If I could kill a panzer in the flanking platoon with my direct firing priests, 105mm shot, and OP shot they would be in poor spirits.  Then if I could kill two panzers with my 76mm, Jumbo and zooks I could force a company test.  Guess what happened.  Nothing absolutely nothing.  All those shots and zooks, and they missed it bounced.  In return Gary went all in knowing he was close to breaking point.  He assaulted the ARP with the 3 panzers.  Who failed to failed to Kill or bail any with 5 shots (pinned and cover).  They got wiped out.

Sensing victory his HQ assaulted the ARP lining the wall overlooking the objective and again overcame the DF and cross checks to force the ARP back and finish the turning holding the objective. A close and excellent game!

I made some school boy errors in this game.  I was too aggressive when I should have sat back and forced him to be hitting me while dug-in.  The ARP could have locked his advance and his reserves were only 3 tanks.  The M10s should have been in reserve to protect them from the air I won’t forget that one.  Again I was over aggressive with the 57mm ambush.  I should have held it for a perfect moment rather than wasting it with sub optimal shot.

Overall though a brilliant game which was really dynamic and involved some tense assaults!