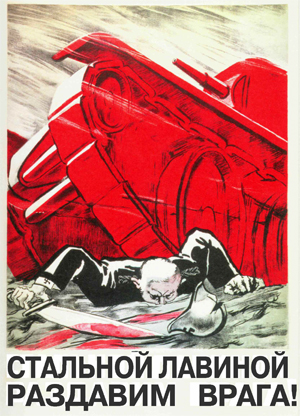 Today, Duncan takes a break from the hullabaloo of v4 and compiling T72s at a frantic rate to play a little game known simply as TANKS!!!!

So Friday night is games night here in our little corner of Sussex, but this Friday we finished our main game and we still had an hour or so before we really needed to leave so we did the only thing a responsible adult could do – we broke out Tanks!

We opted for Germans vs. Soviets as something different and it also meant that we got to just some of the new cool Premium Property buildings we’ve been picking up from Battlefront, including the substantial damaged Russian church.
I’ve been itching to try out the Soviets (I’ve always had a soft spot for their quality of quantity) so I picked a 100pt list with a tooled up IS2 and 3 basic T34/76s. My opponent, Luke, grabbed his 2nd Panzer dice and rolled on to the board with a well-proportioned for of 2 StuGs, a Panzer IV H and the ominous Panther. The armoured fist of the Eastern Front And their adversaries from the 12th SS – HJ Division

My plan was simple: run the three T34s fast and hard at the Germans, get into 1 measuring stick of key targets and then let the hard hitting IS2 do the real heavy lifting. It’s not a subtle plan but then they are Soviets and subtlety is not really front of mind.

The great thing about the T34 is that it is also a fast tank which allows it to move up to 3 times in a phase giving it 2 major advantages:

This is not a guarantee of longevity as dice will fail you at some point but means that usually you will be rolling the same number of defensive dice as the Mark IV and Stug are kicking out so offers a degree of survivability.
So with lists compiled, game plans made and dice at the ready we roll to see who would start to place terrain first. The Soviet master plan had clearly worked as I won the roll and placed the ruin church, then the central tower and finally the wood to the right of the board as I looked at it. The terrain down, I was quite happy with the placement but I worried slightly that the church and far building gave some nice sniper positions to tanks; but it all depended on the deployment. A well appointed small town with a large factory and a church that makes the Kremlin look drab.

On to getting some tanks on the table! Initiative dictates when you deploy so first down were Luke Stugs, on either side of his table edge covering some of the more obvious fire lanes. As all my tanks were initiative 4 they all went down together and, keeping with the rapier like thrust of my plan, I lumped them all together opposite the right-hand wood on my table edge ready to spring forward. A Soviet rapier… looks a bit like a metal brick…

Now everything was set up it was time for turn 1 – the German StuGs went first, one sneaking up behind the cover of the clock tower, and the other keeping tucked behind the building on my right. The Soviets went next and I powered two of the T34s into the wood at full speed with the IS2 lumbering in with them. The last T34 broke to the left to cover that flank and to take a cheeky shot at the closest StuG. A stalking Stug sneaks slyly, shadowing the significant silhouette… of the big clock tower. Ran out of S’

In response Luke move up his Pz IV on my right, to the edge of the large manor building, and the Panther stalked round the edge of the church, ready to pounce. My shooting was far from impressive with the cheeky shot on the StuG completely whiffing and in return I also fluffed my defensive dice and took 3 damage straight to the chin – a normal hit and a Direct Hit critical! Nasty! Turn 2 saw the StuG on my left push up to the clock tower and take up a concealed firing position there, with the other StuG remaining stationary.

To the thinly veiled threat I responded in kind by hiding my damaged T34 behind the red factory building, out of sight of the ominous Panther. The other T34s charged forward towards the StuG and Pz IV, leaving the IS2 to move up to the woods edge and provide covering fire. The shooting phase was a little kinder this turn to me my T34 on the far right took 3 hits from the Pz IV, and in return chipped one point of damage off it’s erstwhile attacker, and the rest of the shooting largely cancelled each other out; apart from the T34 by the factory taking another critical hit.  This wrecked it’s engine leaving it unable to move next turn unless I repaired it and with only 1 hull point left – not good. My reliance on my huge 122mm monster pummelling my opposition into the dirt was backfiring badly. In the repair phase I managed to roll a 2 for my engine repair so I remained unable to move and went into turn three acknowledging the fact that I was sure to lose one T34 and with a second in serious trouble against the Panzer IV. To compound matters I realised that Panther would be in the thick of it this turn and with the Bobby Woll upgrade I could be in for a good old fashioned shoeing in the very near future.

So it was the top of turn 3. Luke left his StuGs in their snug little firing spots and preparing to duke it out with my T34s. I took the opportunity to continue moving my far right T34 behind the Panzer IV and to get a rear shot at close range on the right-hand StuG. The IS2 moved out of cover and the mobile T34 on my left zipped round to get a flank shot on the left-hand StuG. All very nice until the Panther decided it was bored watching T34s racing around and decided to come and play with the IS2. This looked like the shooting phase that was going to make or break the game now. The Panzer IV, using its superior commander initiative, rotated its turret and proceeded to drill the T34 whizzing past it with 3 unblocked critical hits, and my furthest right T34 exploded in a plume of oily smoke.1-0 Germany. And where do you think you are off too Ivan?

Using the Radio Operator upgrade, the left-hand StuG used the Panzer IVs initiative of 7 rather than its own of 3 to fire at the badly damaged, immobile T34. More cooking off rounds and it was 2-0 Germany. This was beginning to have the hallmarks of another ruthless German victory.

But then, the Soviets decided that there was ammunition in their under-powered 76mm guns. The T34 by the clock tower, lacking a proper factory paint job and rusty though it was, used its Arrowhead upgrade, at close range and in the flank, to decimate the StuG by the Clock Tower. 2-1 Germany – the comeback was on! To further aid the Soviet riposte, the Panther scored 3 hits which were ably deflected by the mighty hull of the IS2. A real slobber-knocker was about to break out and the Panther and IS2 were going to be at the eye of the breaking storm.

Turn 4 hurried round and Luke went all out – keeping all his tanks stationary, he planned to maximise his 3 remaining tanks firepower and use the rule that allowed stationary tanks to re-roll all of their attack dice should they wish to. Reeling from the one-two punch I re-positioned the IS2 back into the cover of the wood and drove the remaining T34 to point blank range of the Panther’s weaker side armour. Unbelievably, no hits were scored this turn which left us both aghast and confused as to what to do next turn to deal a mortal blow to the others force.

Luke again chose to hold his ground with the StuG, daring me to remain stationary too. I chose to launch myself on the Germans at point blank range trying to prey on the StuG whilst resisting the Panzer IV and Panther. In hindsight, a suicidal action, but one that would pay off in a big way in the firing phase. The StuG missed the IS2 and was promptly gutted by the fire of the point blank T34 and IS2, Luke shrugged off the loss; he’d already moved on to the German 75mm guns and the punishment that they would inflict in return. The Panzer IV took careful aim and scored 2 hits on the IS2 – a solid start – the Panther hastily rotated its turret and sent its high velocity round screaming towards the IS2, only for it to sail past the hulking Soviet monster.

Like a microcosm of the eastern front the Soviets had rode their luck, weathered the worst that the Germans could throw at them, and had come back swinging. With the Soviets having the upper-hand, we move into the final and fatal round.

Where the Panther was, I thought that there was no point moving the IS2 – it would have to take its chances duking it out with the Panther in the open.  But the T34 I skipped back in to the woodland to cut off the Panther. Luke opted to move the Panther back into the woodland to gain a modicum of cover from the IS2 – I asked him about this afterwards because he couldn’t get his tank in and facing the IS2. I explained that in being flank on to me all the benefits of the cover were negated. This is a serious case of rules blank – where you get fixated in getting a positive bonus on the table without consciously thinking of the negatives. And it was all going so well…

With all the moves locked in. the Panther did its thing and blew the IS2 to kingdom come but in reply got destroyed itself by the combined fire of the T34 and IS2 – note this is an interesting thing about the Tanks game. No tanks are actually marked as destroyed until the end of the turn; so in this situation even though the IS2 is destroyed first in the firing stage by the Panther it still got to lower the boom on it in reply later on in the phase.
So, as the dust finally settled – it was, by the narrowest of margins a Soviet victory.

Overall I was very pleased with how the Soviets performed – I’d like to try some T34/85s next time, or a SU100; but generally happy with how it played out. From the German point of view, I know that Luke was not impressed with the Bobby Woll upgrade card – for 5pts there are too many conditions required to make good use of it. I think he’ll be looking at other options there, and with the release of the Puma and Tiger sets there are certainly some more variety available for the Germans now.

I hope you enjoyed my little trip through a Tanks skirmish – let me know what you thought and until next time may you side armour be strong or never shot at!