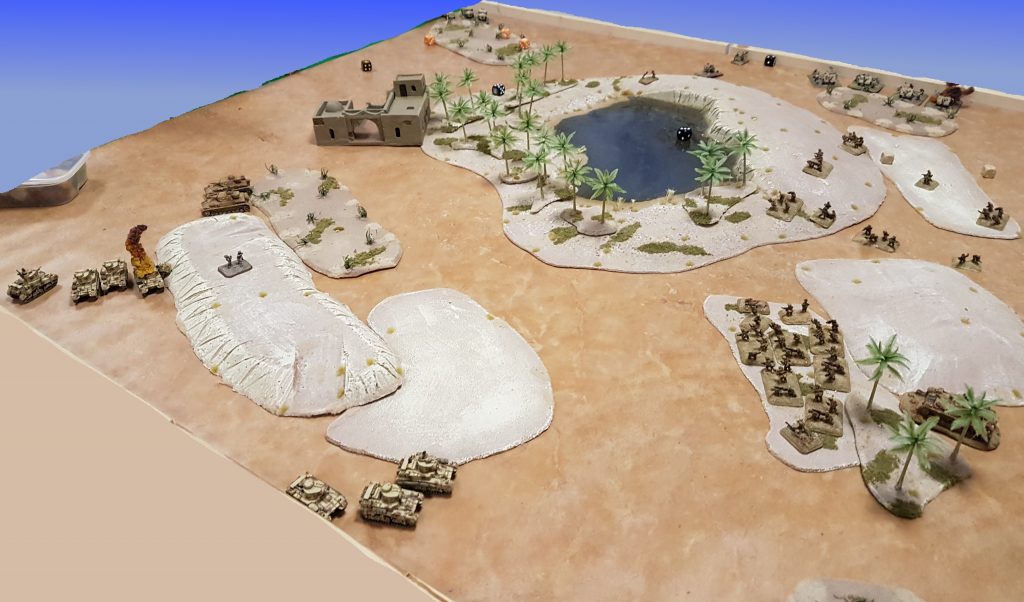 Having had to downsize the Dak! Dak! Go! Tournament this year due to changes in the Dice Saloon game area, Nathan and I find ourselves on the sidelines for this year’s tournament.  Still, we may be needed as last minute reserves and so we arranged a friendly game to keep our skill’s sharp.

With 1500pts, I took four Stuarts in the HQ so as to give myself an extra platoon for the price of only two Stuarts (seeming as I’d have a 2iC anyway).  Along with the two mandatory platoons, that gives me ten of the lightning quick little tanks.  I added a motor platoon, sadly sans anti-tank rifles, to hold objectives or clear infantry and also added a four gun horse battery of 18/25pdr (proxied by 25pdr whilst I wait for my PSC kickstarter).  The latter can pack a pretty good punch in direct fire as well as useful suppressing barrage and smoke.

I had some points left so sporadic Hurricane interceptors seemed a useful way to spend it, rounding the army to 1485pts with nothing else worth spending it on (may get some turretless OP armoured cars in the future). Nathan opted for two platoons of Schuzen infantry, a Kradschutzen platoon for mobility, 222 armoured cars for recce and then 3 Pak-38 and a pair of Panzer IV for anti-tank work.  A very tough nut for the Stuarts to crack!  Nathan finds the 105cm artillery too expensive in early war so opted not to put points into artillery – worse case the PzIV can fire a barrage. (going off memory here – this seems about right)

I got to the shop first so set the table up, aiming to get a good spread of area terrain (scrub and rocks) whilst putting the large Oasis I built for the first Dak! Dak! Go! offset from the centre line.

(Note. this was something of a learning experience.  In future I will take a camera rather than use the mobile’s camera and try and do a better job at keeping the table clear.  As the backshop play room is fairly cluttered I removed it, badly, from the background.  I’ll get better at doing that I promise!) Technically “Breakthrough” was the second game of the night as the first, “Hold the Line”, ended by turn two after an… ambitious turn one assault onto the objective went south – gifting the game to Nathan. In that respect, “Breakthrough” seemed more appealing than lumbering straight into Nathan’s fire.  I could use my mobility to get to the objective before Nathan could reinforce it, giving me a fighting chance of holding it without needing to wade through dug in Infantry.  That was the plan anyway.  I chose the oasis quarter to set up in as it gave a decent covered route to double the Stuarts around behind the rocky hills.

Nathan elected to have his Panzer IV and Kradschutzen in mobile reserve, leaving the Sd KGz 222 armoured cards as his on board mobility.  He set all his force up in one quarter, leaving the one I planned to double through open; result!  On the downside, he had set up to move one platoon of Infantry to the closest objective, through a palm grove whilst his armoured cars covered the furthest one.  Clearing out a palm grove with trained tanks was not my idea of fun so I elected to put one troop of Stuarts (the one led by the 2iC), plus the motor infantry, in flank reserves and focus my efforts on the furthest objective.  the rest of my force would flank and tie up his forces to keep the pressure off the far objective as my reserves arrived. Start of game!  Ignore the small pile of artillery HQ/staff teams in the corner…

Nathan had Recce so moved the armoured cars onto the far objective. Sneaky! Still, its a (barely) armoured car.  How hard can they be to kill?

I doubled through the desert to the rocky hill.  I was well out of sight and only his Panzer IV coming on from reserve and shooting me in the arse (at double rate of fire) really threatened me.  And what was the chances of that on the first turn?  Hmm… I really need to make some dust cloud markers…

The 18/25pdr crash actioned behind the brush to gain some cover and tried some harassment fire on the PaK-38 to no gain.

Nathan rolled for his reserves… and of course got one.  The Panzer IVD lumbered on behind the Stuarts.  One of his infantry platoons moved to occupy the palm grove by the objective but he seemed content to let the armoured cars hold the other objective alone. On the bright side – no templates

The PaK-38 opened up on the 25pdr and killed one.  The Panzer IV opened up and…only killed one Honey – annoyingly the platoon commander and bailed another! That was a relief.

Nathan storm trooped the Panzer IV behind the rocky hill to minimise the return fire. All in all, it could be worse…

Turn 2 – what do you mean there’s a Panzer behind us?

The CO spun his Honey around to face the Panzer IV whilst the other Stuart remounted and swung its turret around to join its friend.  It meant exposing the rear arm out but four shots (plus the CO’s one) was better than two!  The other troop, having not been the focus of attention and so intact, raced off towards the palm grove.  I wanted to keep that between me and the PaK-38. You guys got those two PzIV right?  Good.  we’ll be all the way over here…

The 18/25pdr dropped a bombardment on the PaK-38 but, whilst it ranged in, failed to hit the team under the template.  Still, the ranged in marker was useful.

The CO and two Honey opened up on the Panzer IV, killing one and bailing the other, but he passed his moral check!.

Nathan got the Panzer back in but failed to get any reserves.  He also failed to dig in the infantry in the woods.  Oh dear!  The Panzer IV also helpfully missed with its shots and failed to storm troop.  The PaK-38 fired at the 25pdr but didn’t repeat their success of the last turn – I made two saves!  All in all, not the turn Nathan wanted.

Turn 3 – Gunner!  Infantry in the trees!

No reserves for me, but I was feeling the game was in my control at the moment.  I had six shots to kill one Panzer IV and then I’d be able to concentrate on the objectives.

The intact Stuart platoon made a lunge for the wood, mainly to keep out of sight of the PaK-38 until I moved to the ridge next turn.  I stayed out of tank stalking range of the infantry in the woods and decided to open up on the infantry seeming as they were not dug in.  Surprising both of us, I killed two stands, including the AT rifle! Sadly, the rest of the shooting did not meet that standard.  The 18/25 repeated fire but Nathan saved – I guess a pin is handy.  The CO and the two Honey with him fired at the PzIVD and missed or bounced off. Uh-oh!

Nathan managed to get his Kradschutzen on and advanced them past the PaK-38 who helpfully didn’t un-pin. In his shooting phase, the Panzer IV fired at the Honey platoon, killing both of them. The CO was suddenly feeling somewhat lonely.  The infantry in the palm grove continued to fail to dig in, despite the encouragement that multiple .30 shooting at them should have given them.

Reserves! Only one platoon but a troop of Stuarts was just what the doctor ordered.  I moved them onto the ridge, near the far objective, ready to kill the Sd Kfz 222 whilst staying hull down against the PaK-38.  I moved the intact Stuart platoon from the palm grove to the ridge line too. Only bailed?!  All three of them?

The CO, realising there was nothing left to do for the burning tanks of the first troop, turned tail and made a run for the ridge.  I was conscious that the PzIV would have a shot at my tail but figured there was no point doing a gun dual when he had better firepower. The ridge line was a blaze of 37mm and .30 fire but the three armoured cars were only bailed!  Not even a morale check to take!  Very frustrating.

The 18/25pdr decided to try and re-range on the far PaK-38 in the hope of getting some Kradschutzen too.  I ranged in, but failed to hit anything.

Nathan sent his PzIV chasing after the CO to no great effect.  The infantry in the palm grove still refused to dig-in.  Nathan did get all his armoured cars in and unpinned his PaK-38.  Nine 5cm shots came my way and, despite my cover, two of the Stuarts brewed up – avenging the fallen German Infantry from earlier.  The troop commander broke at that point. Turn 5 – Did we forget to pack our war rounds??

The Motor Infantry arrived from reserves and made a bee-line for the Stuarts to reinforce them.  The CO  passed the palm grove and fired off at the Infantry but couldn’t repeat the success of the earlier shooting.  The Stuarts opened up on the Armoured Cars and again bailed all 3!  The Infantry fired a shot off at the Kradschurzen but it did little other than make the Motor Infantry feel involved.  The artillery managed to pin the PaK-38 again but I failed my fire-power check to kill a gun. The German reply saw only the command armoured car remount, but it moved to shoot the infantry.  The Kradshuzen moved up to the foot of the ridge and opened up at my infantry, killing the light mortar.  In such a small platoon, any loss is a blow but I would take losing only the mortar.  The pinned anti-tank guns only bailed a Stuart.  I had some breathing space.

The CO arrived at the ridge line and his presence saw the shooting at last kill a single solitary 2cm armoured car, although he failed to inspire the bailed Stuart to remount.  Sadly the rest of the armoured cars stuck around.  The infantry fired at the Kradschuzen and killed a stand.

In reply, the PaK-38 picked off two Stuarts, double bailing the bailed Stuart so that he fled and killing the platoon commander (the 2iC who did not survive the unhorsing).  The last Stuart ran. I was on a company check. The CO passed the check and  picked off another armoured car but still they would not run!  The infantry did little.

In Nathan’s turn the CO got double bailed by PAK fire and ran.  The Infantry lost two stands but passed their morale check; not that it mattered.  With no CO, I could not pass the check.  The game was over with a German victory. It felt like two things served to hurt me in that game:

The Armoured Cars was frustrating, but when the dice go like that there is little you can do.  The PaK-38 I could have dealt with in one of two ways after it became clear that I would not kill them with artillery.

There is also a case to be made that the two Honey should not have tangled with the Panzer IV but instead have broken off when they survived the initial shooting.  Its hard not to honour the threat though.

All in all, the game felt like it drifted away from me and I should have been in a better position to win the battle of the ridge.  Ultimately the Honeys need to deal with anti-tank threats quickly or they will evaporate under fire.