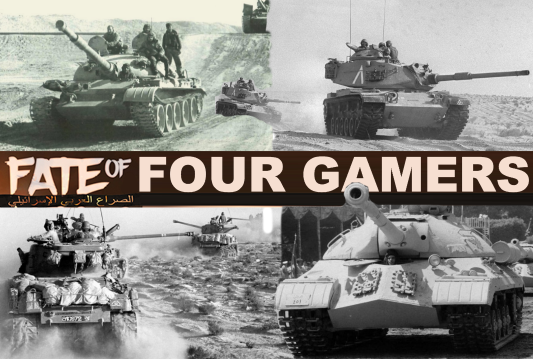 
So here we are, the last month of the Fate of Four Gamers challenge!  This week we will see how each of the chaps fared in month two and what their plan is for month three.

I started Month Two with five tanks to paint and, unsurprisingly, I met my target!  Not even Reaver Titans could distract me.

The painting followed much the pattern of the first three with a couple of exceptions:

The panels were fitted in one of two ways, either by creating green stuff panels for unfurled panels, or by using the “folded tarp” stowage piece from the original “Open Fire” Shermans.

Painting wise, I needed the panels to stand out so needed a more vibrant finish than one would normally associate with military kit.  I turned to my Citadel paints and used Averland Sunset base, Yriel Yellow layer and then applied a Fuegan Orange wash to give the desired yellow/orange panel.

So, except crew, that’s all the tanks done!  Month two is complete.

But, if Month one and two were relatively straightforward, then month three is going to be a big step up.  I need to assemble and paint:

That’s a big step up from five tanks!  I decided that the M7 Priest and TOW Jeep would be built with no conversion work and only minimal additional stowage, if any,  Instead, effort will be focused on going to town on the M113 with the Israeli stowage upgrade blister, plus surplus infantry in the hatches.

Before Month two came to an end, I made a move to get the Priest, Jeep and tank crew painted up, plus the surplus infantry to man the APC.  I was going to use “Russian Uniform” as the base colour for the unoforms as I fiound on my DAK that “Yellow Green” ends up a bit too vibrant.  I wanted a more “sun bleached look”.  Using “Yellow Green” as a highlight was still a little bit too bright, but “Grey Green” gave the desired look.

Happy with that look, month three sees me start off with the infantry from the M113 platoon. Then I’ll get the M113 built and paint all the vehicles on one go for the last couple weeks of the challenge.

Ben has been somewhat overwhelmed of late by IRL.  He should be updating us soon.

When did it become October?!

The home stretch is always a mixed blessing with a marathon hobby effort, the previous 45 tanks have really taken their toll on my enthusiasm to paint more desert yellow, and yet the finishing line is in sight!

This final month only leaves nine BTR-60’s, twenty stands of infantry, four Centurions, four AA tanks and two Mig’s… more models than I usually have in a full list!
I also hope to find time to put the finishing touches on the whole army, the 60 points I’ve painted so far are table top ready, but missing the unit marking and AA hmg’s.

I’m fairly happy in my spray, black, metal, chip and wash routine; individually they don’t look as nice as the other chaps efforts, however there is the whole quantity over quality that makes them rather impressive.

I think that’s the biggest take away I have from this project, rather than not doing anything over the fear it won’t turn out as ‘good’ as you want it to on a project of this size, just get the basics done and you’ll be amazed at the response you get from people.

That said, I did nearly lose all my will to live cleaning up those infantry figures…. So much scraping and filing! These guys did amazing with their AK’s in their first game against Lee, so they were worth it – and the sculpts are the usual BF level of awesome.

The end is in sight… nearly… maybe… just…

The final month is my quiet one with just ten T-62s to paint; apparently I am a sadist though and I thought that I’d throw in some SU-100s and two custom objectives to spice things up a little. What a goon.

I’ve actually managed to complete the T-62s already this month – having painted 40 odd tracked vehicles over the last 10 weeks I really don’t know how Eddie did it. I wanted to try and add some variety by adding some camouflage to the T-62s and make them really look the part as the cutting edge of the 1973 Egyptian Army.

I’ve also polished off the SU-100s in the traditional sandy colour that the rest of the vehicles in my army is in (I’m really looking forward to painting something that is not dark sandy yellow now) and on that note I have started one of my objectives as a knocked out Israeli self-propelled gun and there maybe some Sho’ts and Skyhawks on there way to me too. Sorry Fez.

So in total I think I’ve actually now got around 110pts of Egyptians now and I really love the look of my force – full pictures to follow when I’ve got all the figures out – and I still have another Thunderbolt Company to complete. With a game upcoming against Lee (hopefully) and maybe event participation this is by no means the end of this journey.