from today talking about the uses of artillery. (And a pic of some I found in Cyprus) 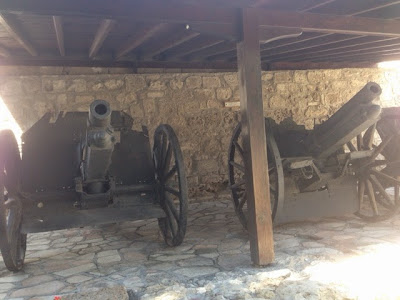 Artillery can range from mortars through to off shore cruisers in flames of war – there is plenty of debate about having artillery represented on the board – as to scale artillery would be further back. Alongside this there have been several ‘artillery park’ lists with 16+ guns which are possibly not that fun to play against. So I’m going to take you through the mechanics in game if artillery, the uses (smoke, pinning, killing) and some tactics on them. 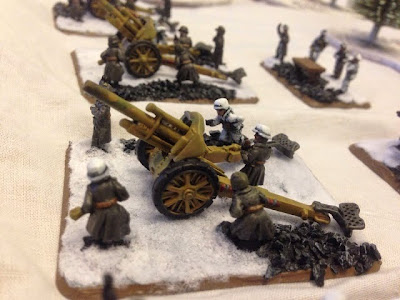 Firing artillery consists of two stages, ‘ranging in’ and ‘hitting’. To range in a team from the artillery battery, including it’s spotter (there are various nations which can share spotters, use Aerial observation posts (AOP), use IC/2IC as well – but I’ll possibly cover this later) has to be able to see the enemy team it is firing at – it’s important to know exactly who is spotting, as to perform an ‘all guns repeat’ the same team must spot – smoking them to stop this is very effective.
To work out if you can spot the opponents team is based on their skill rating, so if you are trying to range in on an enemy veteran unit you need a 4+, you also apply other modifiers, such as concealed, gone to ground, etc – but not long range (in normal shooting) and a roll of a ‘6’ always succeeds. You get 3 attempts to do this as standard, and each attempt affects the ‘to hit’ in the next section. Some nations/ weapons get bonus rolls, e.g mortars re-roll their first attempt, and it’s possible for Brits with an AOP to get 5 dice to range in. 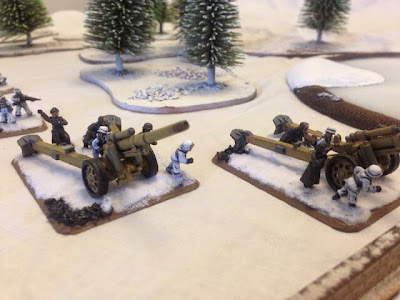 So as a worked example my 8 veteran artillery is ranging in on some trained tanks and infantry. I’ve chosen my spotter to observe the enemy, and he can see a trained tank (3+) in cover (+1 – so a 4+ roll to range in). I roll a 1, on the first attempt, roll a 3 on the second and finally a ‘4’on the third. As I have 8 guns I get a ‘double wide’ template, or I can reroll hits on a normal template, as I will be hitting on a 5+ (normally 3+ as veteran but as it took my 3 attempts to range in you add +2) I think re-rolls may be effective. With two tanks and one infantry stand under the template I roll to hit, hitting one tank and the infantry team.
Following on from this is damage, my bombardment has an anti tank rating of 3, the Panzer is top armour 1, so if he rolls a 1 I can destroy him on a firepower roll of 6, otherwise he is bailed, if he rolls a two on a firepower roll of a 6 he’s bailed – otherwise he is unharmed. 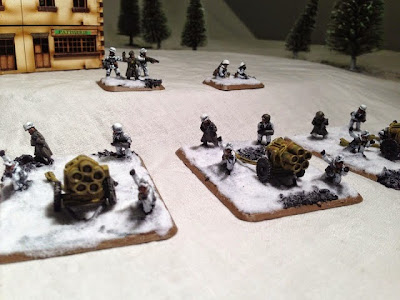 For the infantry team they have their 3+ save, if they are not in bullet proof cover they are dead on a failed roll (and the platoon is pinned), if they fail and are in cover I need to pass a firepower test – even if the team does not die, but is hit, it’s pinned.

If I’m firing smoke this is done at the start of the shooting step (after recon attempts to lift Gone to Ground) and only requires you to range in, no ‘to hit roll’ is needed you just place the smoke down (again more guns = more smoke).
Smoke – As I finished with smoke I’ll start with it here. Please go and read this article 🙂 smoke is there to allow you to move safely, and reduce incoming fire.
Destroying units – this is actually hard to do with artillery – even assuming you have top level artillery (AT5 FP2+) and you’re shooting veteran, gone to ground, dug in infantry – that is a 1/6 to range in, then you hit, then they save on a 3+, then it’s a firepower test…. So you have to be smart using artillery to kill – targeting dug in infantry (especially with a regular sized template – your opponent should have wisely spread out!) is a long slow way to get kills. Conversely gun teams are a far better target, either after they fire or by lifting GtG you can erode them quickly due to their weaker 5+ save. But the real advantage of artillery in killing are the national rules of the US and Britain. For the US ‘time on target’ mean any unit ranged in on the 1st attempt has to re-roll successful saves – against dug in veteran units less effective, paired up with an AOP and against trained tanks – far more effective. For the Brits ‘mike target’ means that when you do a repeat bombardment (once you’ve ranged in, and if your artillery has a staff team, you can use the same spotter to automatically range in next turn) they have to re-roll saves – this can quickly erode anyone on an objective. What further helps these nations (and others) is the ‘combined bombardment’ rule – if you have this rule and 2+ artillery batteries with staff teams they can link all their guns into the bombardment – you use the weakest gun as the base, but if 1/3rd are more powerful your AT increases by one and FP drops by one – and of course your template size increases… In summary if you want to really hurt people with artillery you need decent sized templates with decent FP and special rules. 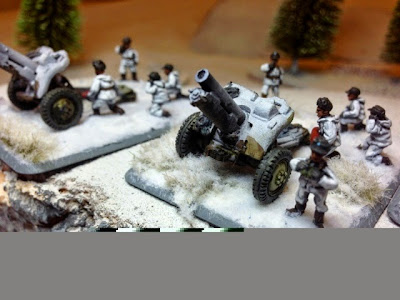 Pinning – sometimes it is more useful to stop the enemy acting than kill them. I was using my elite SS-Westfalen list against a friends vast Italian infantry hoard – I couldn’t take them all on, but by pinning the odd platoon here and there I could stop them coming in all at once – greatly improving my odds. This equally applies to enemy AT and artillery – just stopping them acting or reducing their RoF can really improve your chances to move in the open or assault, and unless it’s against Japanese infantry all you need is one hit.

So how do I actually use it in game? Well this really depends on my list. If I’m playing a list like my British Para’s or Welsh then my artillery is hitting the units on the objective trying to really remove them, normally with smoke to cover my advance.
Conversely if I’m using some Panzers I’m really thinking that smoke is the priority, stopping big anti tank weapons from targeting me, normally if I have to assault I have enough MG’s to force a Pin.
In defence though I love to utilize artillery to break up infantry assaults, this was perfectly done in my 2nd game at the Welsh open where by pinning 2-3 units a turn his infantry got spread out meaning they were more manageable. And the other option is hitting his own artillery to pin them – if I have some high end AT artillery and he has some tanks I’ll target them – but the chances if a kill are still small. 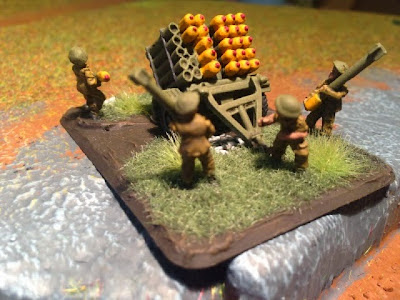 The other thing to consider us direct fire, some artillery is great at this, (the FK40 for instance – an artillery Pak40) same with my Finns in EW they use artillery as direct AT, conversely you may want cheap and cheerful smoke/pin only like nebs.

Counter artillery tactics – seems only fair to include this! I have three favourite options for stopping artillery being effective.
Stop them seeing – Often artillery is on the back edge with only the command team and spotter visible, smoking or destroying these teams is a very effective way of reducing what enemy artillery can see of yours to shoot. 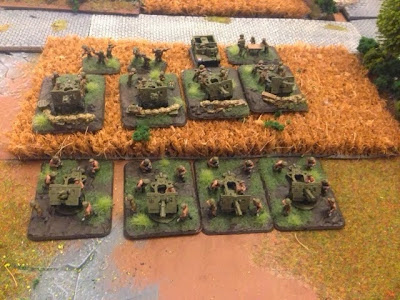 Stop them shooting – pinning them with either your own artillery/air of rate of fire is very effective. Often artillery is confident/reluctant so even a 50% chance of stopping them bombarding is a good plan.

Assault them – one of the common ways artillery is deployed is spaced out (avoids you being hit by a template yourself) this makes them vulnerable to assault, – that and commonly artillery is RoF 1 – if you can get your own forces close and backed up by smoke you can often be on a +2 to hit from defensive fire giving you a good chance of getting into combat – and as heavy/immobile guns they’re not escaping after! 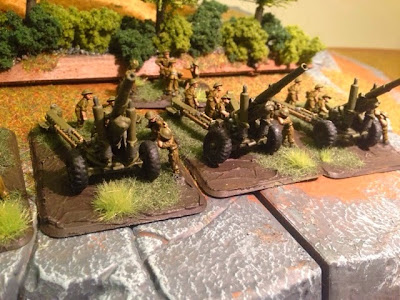 Anyway I hope this was useful and informative – until next time.