Bashing It Out – The Brighton Bash Tournament and Theming

I’ve been invited to come and write about Flames of War here on Breakthrough Assault and I must say I’m honoured.  Ben asked me to start off by writing about the themed tournaments I’ve been involved with (and mostly running, though a tip of a hat to ‘Polish Tom’ who has done pre-tornie organisation for the non-Bash Brighton tournaments and the long suffering Nathan who I rope into a lot of this as co-organiser with nerry more than a vague promise of lunch).

As a little background, I’ve been playing Flames of War since “Desert Rats” came out for V1 in 2006 and worked to get the game established in the Brighton Warlords war gaming group.
It’s probably worth stating at this point that I’m by no means a Tournament player.  I did a few back in my 40K days and generally disliked the experience.
In some ways that probably colours a lot of what follows*…

A fellow Brighton based wargamer, John Mumford ran the first “Brighton Bash” in 2009.  After he moved back to Australia (I don’t *think* this is because of ow the first Bash went) I picked up the baton and ran a (almost) yearly tournament under the Brighton Bash name.  Whilst not really interested in playing in them, it was clear that there was a local interest in playing in them.  It just needed some poor sod to do all the legwork… 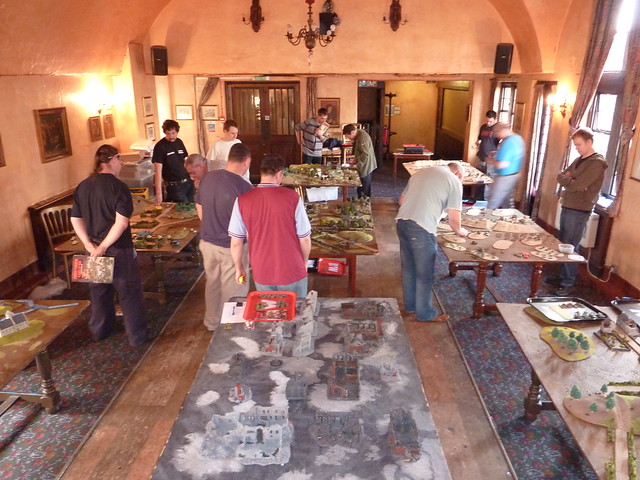 The first tornie I ran – a small local FoW in the October after the first Bash.  In the King and Queen pub.

I decided early on that I wanted Brighton tournaments to be about the game rather than the rankings and that a Brighton tournament should always have good looking tables.  In some ways they became somewhat notorious on that last point.  We like a crowded battlefield in Brighton but I have got smarter in how we do the terrain… 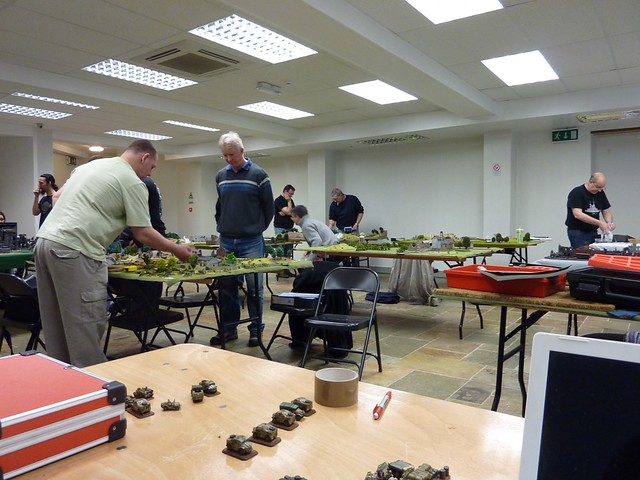 The first Bash I ran – Bash 2010 at the excellent venue but sadly defunct Wargames Heaven.
Still had to work out the whole “don’t clash with a major national tournament” and “tell people you exist” thing…

Initially, as the Brighton FoW community was still growing, the format was kept as an open book mid war tournament to maximise participation in a fairly small local base.  After running two tournaments in that format I was dissatisfied with the “blue on blue” format and wanted to shake things up.  Fundamentally Flames of War has the trappings of a WWII game and part of that is the fight between the allies on one side and the axis on the other.  It just looks so… wrong to have a British Light Tank Squadron duel with a Soviet Heavy Tank Company.  Those little 2pdr pop guns don’t go through their historical opponents let alone those brutes!

So, in 2012 I decided to switch to an ‘axis vs allies’ format; making the 2012 Bash an “all late war” but “axis vs allies” tournament.  In this format the player base is split into two sides (axis vs allies); so a twenty player tournament will have ten allies and ten axis players.  Axis players only play allied players. Simples – on the face of it. 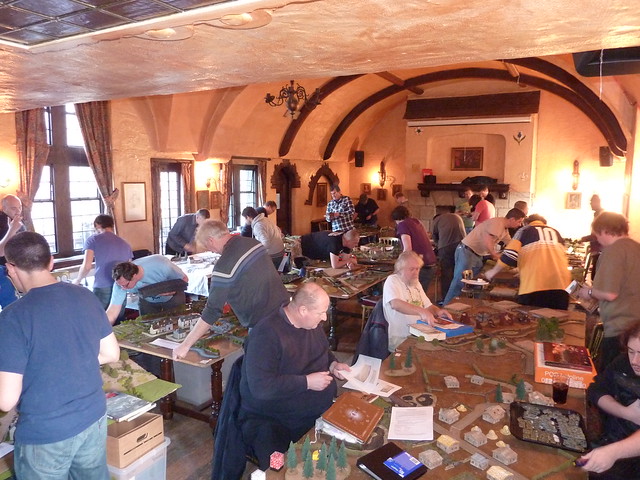 Brighton Bash 2012 – Back in the K&Q and finally starting to get some speed.  More of the national crowd in attendance.

The Brighton player base had largely grown to the point where most of us had two armies for mid war and were starting to have it for late war. Club games had thus already largely shifted to axis vs allies, the exception being when we are doing training games for those heading off into the national circuit.

The ‘axis vs allies’ format has some drawbacks.  From the point of view of the tornie organiser it adds a headache both ahead and during the tournament. Normally selling half your tickets in a day is great.  Now imagine that all those tickets are just for allies…  Suddenly you have to turn away allied players and find axis players.

Likewise, sudden drop outs can be a headache. I can guarantee if two people are late or are force to pull out entirety they will *not* be on opposing sides!  I usually bring a force for both sides so I can jumps in to cover and try and encourage (bribe) my locals to do likewise.
The actual game-game running isn’t too hard; Excel crunches the numbers, sort the results by side, highest to lowest (so basically swiss system) and job done. Once in a blue moon I may have to work to remove a rematch but it’s, touch wood, fairly rare.

A minor issue in the eyes of some is that you don’t get a true reflection of best player with the Axis vs Allies system as it is constantly pitching the momentary top players of the two groups and inevitably one of the two players will come off worse.  In a true ‘open’ swiss system then the two best players should meet in the last game.  Nathan (my co-organiser) and I noted in the 2012 Bash that the best axis general was the person who lost to Steve Charlton (running Brit Paras and dominating the allied side) the least.  For the Brighton Tournament I don’t really care about that limitation but I can see how it may be considered inappropriate for, say, the GT. 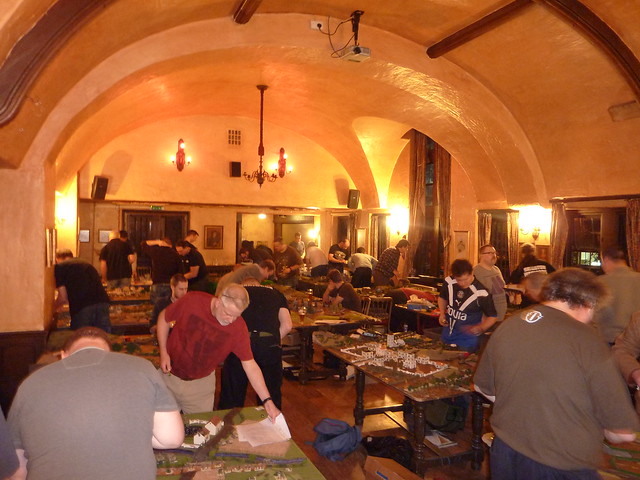 One last thing I wanted to try was limiting the tournament to one theatre. This really gets back to my desire to drive the (tenuous) historical nature of Flames of War.  The “all late war” threw up some tough matches for predominantly Normandy themed axis (21st Panzer StuG Battery vs KV-85 anyone) and it seemed the simplest way to do that was to say “all lists from the D-Day books” and so on.  I was fairly happy that the national and local player base could support this and we have conducted “Market Garden”, “Eastern Front” and “Late Late War” tournaments.

Advantages?  A feeling that the match ups are somewhat “fairer” (this does vary from Theatre to theatre.  Market Garden is a tough game for the axis outside of perhaps two or three lists).

Disadvantages? You will inevitably screw over some players (sorry Russian players – I just can’t get excited setting up eastern front tables).  And some themes are very hard work if you also double up as the areas terrain manufacturer (ten desert tables doesn’t sound a lot but when you only have about three tables worth of terrain four months prior to the tournament…). 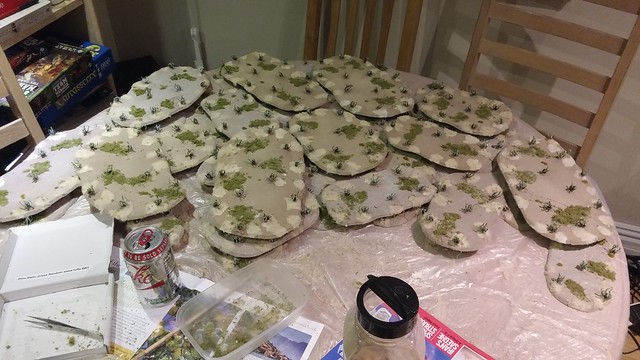 It’s all right.  I didn’t want to spend Christmas with my wife and newborn daughter…

All of that brings us up to “DAK! DAK! GO!” (a play on the title of the board game “Duck! Duck! Go!), the 2016 Brighton Bash being hosted at Brighton’s own “Dice Saloon” games venue.
In this I have taken the concept further (perhaps too far) by not only limiting the tournament to the North Africa but limited the choices within the book to those appropriate for the El Alamein Breakout/Operation Torch time period.  The main aim was to create a tournament where the Sherman/Panzer IV was the king of the roost, where a Light Armoured Squadron was a serious prospect (well, a bit more serious) and even the Italians would have their chance to shine (if only by the light of their burning M14…).

How will that work in reality?  I have no idea. Raiding Forces are still scarcer than I hoped.  King Force is scarcer than I feared would be case.  Axis players seem to have shied away which *really* surprised me.  I didn’t expect allies to be the first one to sell out. 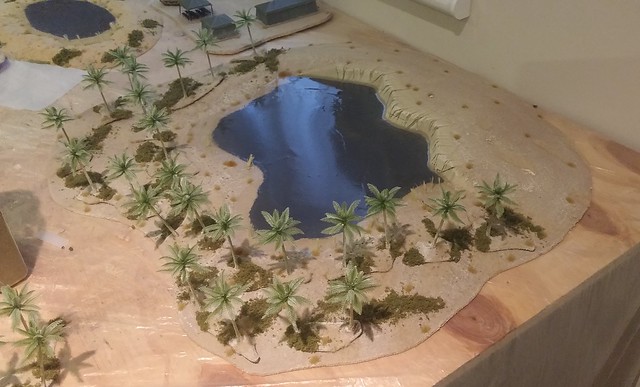 A preview of this Bash’s signature table – “The Oasis” 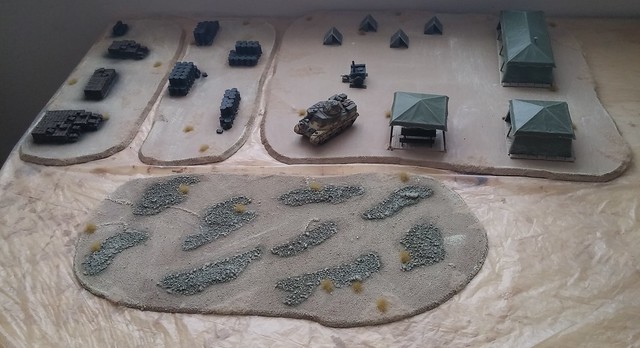 And some of the bits for “the Airfield”

All in all, it will be the post action report that will really determine how well all this worked… Desert test table at the Saloon…

Brighton Bash: DAK! DAK! Go! Runs on the 16th/17th January at Dice Saloon in Brighton.  An after action report will follow shortly after that.

(* I should note that I have played in a few of the local tournaments to make up for missing players and even won best allied in the Market Garden one – somewhat embarrassing.  In all cases I actually enjoyed the experience and perhaps I should give some of the national events a go…)